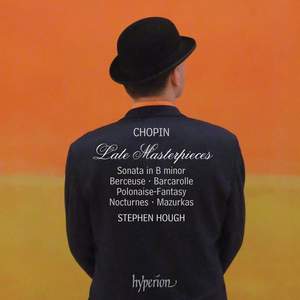 Hough stresses the Classical outlook of Chopin's Romanticism, even in a programme encompassing some of his most harmonically advanced music. The opening Barcarolle has rare clarity, and the Berceuse... — BBC Music Magazine, June 2010, 4 out of 5 stars More…

Stephen Hough joins the celebrations for Chopin’s 200th birthday with a disc containing much of the composer’s most extraordinary music, written in the last years of his life where the expressive possibilites of his art were constantly unfolding as he imbued his favoured forms with previously unknown levels of complexity and emotional depth. This disc includes the intoxicatingly ornamented Berceuse Op 57 and the sublime Barcarolle in F sharp major as well as the Polonaise-Fantasy in A flat major and the towering Piano Sonata No 3 in B minor. Also included are two late Nocturnes which demonstrate how Chopin’s art had evolved since he first composed in that genre in his youth. The programme is completed by a selection of Mazurkas, each a tiny jewel, containing no less mastery than their larger counterparts, and providing moving sonic evidence of the contemplative profundity of Chopin’s late style.

Stephen Hough’s extraordinarily sensitive playing is informed by his limitless technique and engaging musical imagination. This is the Chopin of a true Romantic.

Hough stresses the Classical outlook of Chopin's Romanticism, even in a programme encompassing some of his most harmonically advanced music. The opening Barcarolle has rare clarity, and the Berceuse rounds things off clearly.

A new Hough disc is one of life's pleasures…A masterclass in pianistic command and stylistic poise with the most heartfelt playing of any of his recent recordings. There are few who can elucidate the question-and-answer phrasing of Chopin's music with Hough's transparency and unaffected simplicity.

I was won over by the lovely tone and touch, the seductive warmth and clarity of the inner parts and the beautifully judged rubato. This is unusually forceful Chopin playing — the sonata is like Chopin played by Liszt — but it carries ringing conviction.

...in every case Hough's command of the music's expressive world is totally convincing...Hough's distinctive voicing of each strand in the musical texture [of Op. 61] is mesmerising. His playing is directly communicative, seductively decorative and, in the sonata, aristocratically controlled.