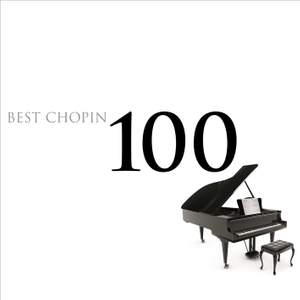 No. 24 in D minor (Allegro appassionato)

100 BEST CHOPIN CLASSICS is the next release in EMI’s highly successful 100 BEST series. This 6 CD box set contains all the most familiar and best-loved works by the Polish composer Frédéric Chopin, performed by a galaxy of star pianists.

Chopin is universally acclaimed as one of the most original and innovative composers of music for the piano, especially in the romantic and lyrical field, but his compositions also demand brilliant technical virtuosity. Much of his music is deeply patriotic and infused with a love of his native Poland. He particularly exploited dance forms like the waltz, the mazurka and the polonaise, and he also developed the nocturne into a significant form of piano literature.

His works have been heard in many contexts including ballets such as Le Sylphides, Dances at a Gathering and A Month in the Country; films like The Pianist, The Truman Story, A Song to Remember and many others, as well as popular songs such as I’m Always Chasing Rainbows, Till the End of Time and Could It Be Magic.

This collection covers all the main genres in which Chopin wrote, and includes the complete sets of Preludes and Études, the 14 Waltzes, plus a generous selection of the most familiar Polonaises, Mazurkas, Nocturnes and Impromptus, as well as single pieces like the soothing Berceuse, the evocative Barcarolle and the stirring Fantaisie-impromptu. Works for piano and orchestra are represented by the Andante spianato et grand polonaise, Krakowiak, Fantasy on Polish Airs, Variations on ‘La ci darem la mano’ and extracts from the two piano concertos.