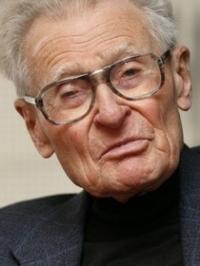 Born in October 1923 in Lwów, Skrowaczewski exhibited remarkable pianistic and compositional talent from a very early age and initially intended to build a career as a pianist, but was forced to change direction after sustaining a hand injury during an aerial bombardment during World War Two.

He spent his early career in Poland, directing orchestras in Kraków, Warsaw and Wrocław in the 1940s and 50s and striking up friendships with fellow composer-conductors Witold Lutoslawski and Andrzej Panufnik. He came to international prominence after winning the Santa Cecilia Competition for Conductors in 1956, and was subsequently invited to conduct The Cleveland Orchestra by George Szell. The following year he became musical director of the then Minneapolis Symphony Orchestra, beginning an association which would endure for the rest of Skrowaczewski’s life: he held the position for 19 years (during which time they released numerous landmark recordings on the Mercury label), after which he was appointed the orchestra’s conductor laureate, making annual appearances until 2016 and celebrating his ninetieth birthday by conducting the orchestra in three of his own works. Other notable positions included principal conductor with The Hallé (1983-92), conductor laureate of the Yomiuri Nippon Symphony Orchestra, and a fruitful stint with the Deutsche Radio Philharmonie Saarbrücken Kaiserslautern, which spawned a much-praised cycle of the symphonies of Bruckner (one of his great passions).

Skrowaczewski was also a respected composer, with major works including a Clarinet Concerto, a Concerto for Orchestra, and Passacaglia Immaginaria (the latter two works being nominated for a Pulitzer Prize). He continued to compose and conduct until the final year of his life, and was scheduled to return to the Royal Festival Hall (in 2015 he became the oldest conductor ever to perform at the venue) this autumn for Bruckner 8 with the London Philharmonic Orchestra.

Find out more at https://en.wikipedia.org/wiki/Stanisław_Skrowaczewski

The Polish-American conductor, particularly acclaimed in Bruckner, has died aged 93.