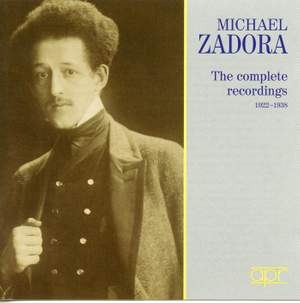 Whatever charms and sparkles is here in super-abundance. Nothing is set in stone and it is easy to imagine the spell such playing exerted in the wealthier American salons...This is a box of delights... — Gramophone Magazine, April 2010 More…

Soirees a Saint-Petersbourg, Op. 44: No. 1. Romance in E-Flat Major

Busoni: Sonatina No. 6 (Chamber Fantasy on Themes from Bizet's Carmen)

Michael Zadora is one of the most obscure pianists to have recorded prolifically in the 78rpm era. Only a handful of 78s have ever been reissued, and no LP or CD has ever been devoted to him. It would appear that his concert career was also not particularly high profile, yet from these recordings it seems he was a very significant artist. Perhaps the answer lies in his background. He was born in the New York of aristocratic Polish parents but returned to Europe to study and was a pupil of Leshetizky and Barth (who also taught Rubinstein). After the First World War he became a disciple of Busoni and indeed played for the great artist on his deathbed. Zadora seems to have been a rather reserved character, much more an intellectual than someone who enjoyed public performance and it is likely that family wealth allowed him the luxury of not have to pursue his career too aggressively. On the other hand, studio recording suited him very well indeed and he seems equally at home in the standard repertoire, such as Chopin, and in more rarefied material, such as the Busoni Sonatinas, where we are undoubtedly hearing an interpretation very close to that of the composer himself. Of particular interest are Zadora's own unusual transcriptions and also the works of 'Pietro Amadis' who was actually a pseudonym of the pianist.

These very rare recordings should be of particular interest to all lovers of historic piano playing.

Whatever charms and sparkles is here in super-abundance. Nothing is set in stone and it is easy to imagine the spell such playing exerted in the wealthier American salons...This is a box of delights aimed principally at those who love music as entertainment, as diversion and enchantment.