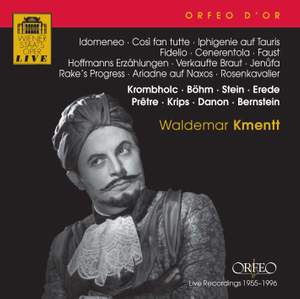 In 1955, he sang Jaquino in Beethoven's Fidelio for the reopening of the Vienna State Opera, and performed internationally in roles such as Mirko Zeta in The Merry Widow until the turn of the century. During all this time, the tenor Waldemar Kmentt gave countless dazzling performances on the world's greatest opera stages. This portrait in honour of his 80th birthday is an impressive reflection of his versatility, with excerpts from roles he performed at the Vienna State Opera, where he was based, and where he received the title of 'Kammersänger' and was eventually made an honorary member.The flexibility and brilliant timbre of his voice brought him many roles at the State Opera, both in the legendary Mozart Ensemble under Karl Böhm and as an 'Italian' tenor (though, as usual at that time, mostly in German).A brilliant rendering of the Italian tenor’s aria from Der Rosenkavalier in 1968 under Leonard Bernstein, concludes the cross-section of the prodigious career of a tenor who, ever modest, never relied on mere showmanship.