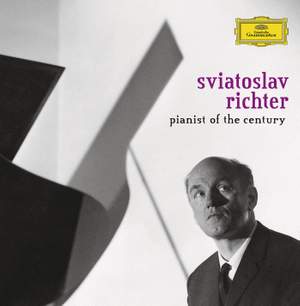 Sviatoslav Richter - Pianist of the Century

No.1 Allegro vivace In C Major

No.2 Allegretto In B Flat Major

No.2 Maestoso In B Flat Major

No. 4 Andante cantabile In D Major

No. 5 Alla marcia in G Minor

No.7 Allegro In C Minor

No.1 In F (Markiert und kräftig)

Ländler In A Major

Sviatoslav Richter represents the summit of pianistic achievement: his incredible virtuosity and strength, his vision of structure and form, the range of emotion he was able to express on his instrument in concert and on disc have never been surpassed.

Now, for the first time, all nine of the solo and concerto LP-recordings he made for Deutsche Grammophon have been gathered into a single box-set at budget price. All of these recordings have been in the DG catalogue since they were made; if they’re not still at top price, they’re in The Originals series.

It started in 1956 with a Schumann recital and ended in 1962 with a recital recorded live on tour in Italy. In between there were five concerto LPs (including Rachmaninov’s Second, Tchaikovsy’s First with Karajan, the Schumann and Prokofiev’s Fifth) and two more mixed recitals. Here they are, faithfully reproduced in their original couplings (newly mastered) and with original artwork in mini-LP format. The CD booklet (in the style of the The Martha Argerich Collection) has masterly new liner notes by piano expert Jeremy Siepmann, who manages to capture the essence of Richter the man and musician, as well as furnishing precise annotations on each of the albums in turn.

An essential box-set for all serious lovers of piano music.