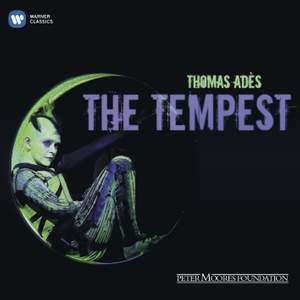 …everyone reaches out to the purple passages when Adès touches something rich and strange. Those include the evolution of the young lovers' music from homages to midsummer Britten and Tippett... — BBC Music Magazine, August 2009, 4 out of 5 stars More…

Miranda - you are my care

What you hvae told me

Fear. Fear to the sinner

Sir? Have you recovered them?

As i sat weeping

I had the notion I flew

They won't find him

Spirit must I right

Fool. You've tired us out

How good they are

2CD Multipack with libretto and slipcase

“there are moments in all three acts which are by any standards sheerly, heartstoppingly beautiful; passages in which the music seems to be mined from an unfathomable depth of feeling …” Andrew Clements, The Guardian

“Adès does not shirk the traditional big operatic moments. There is a thrilling and moving quintet of reconciliation and he gives each of his main characters an imposing and impressive aria…these are expressed in music of extraordinary imaginative power.” Michael Kennedy, The Sunday Telegraph

"The evening deservedly belongs to Adès, who himself conducts a score as orchestrally lush and evocative as vocally varied and articulate. The cumulative effect is by turns ethereal, witty, incandescent, often ravishing". The Guardian 2004

“(Adès’s The Tempest) has the potential to be one of the most enduring new operas of the decade. (…) If you need proof that the hype surrounding Adès is more than just hope and expectation, you will find it here” The Guardian on the Royal Opera House revival in March 07.

“Adès has provided Covent Garden and British opera in general with one of its great moments. The cheering from every corner of the theatre on Tuesday - orchestra pit included - felt like what it was: British opera’s equivalent of the England World Cup rugby win.” The Guardian

The Chorus and Orchestra of the Royal Opera House Covent Garden, Thomas Adès

…everyone reaches out to the purple passages when Adès touches something rich and strange. Those include the evolution of the young lovers' music from homages to midsummer Britten and Tippett to the heights of Act II, Ariel's banquet and masque in Act III, and the ensemble-passacaglia which takes the ultimate centre of gravity from Prospero's perfunctorily written farewells.

It may not be a flawless masterpiece ... but it is one of the most viable and stageworthy of modern British operas...The playing of the Covent Garden orchestra is another luxury no, a necessity, given the brilliantly conceived and demanding orchestral aspect of this piece.

From the tornado-like prelude to Ariel's stratospheric yet ethereal "Five fathoms deep" the music illuminates rather than merely illustrates the drama. …Kate Royal as Miranda, is fully inside her part and sings alluringly… For many, the most memorable writing in The Tempest comes attached to Ariel's vocal high-wire act. Few coloratura sopranos are able to dispatch it like Cyndia Sieden, whose sound lends special colour to the performance... Simon Keenlyside, on the young side as Prospero, mixes brain and baritonal brawn in his characteristically charismatic way. Ian Bostridge sings unstintingly as a wonderfully weird Caliban... The playing of the Covent Garden orchestra is another luxury - no, a necessity, given the brilliantly conceived and demanding orchestral aspect of this piece.

well constructed and dramatically effective in its clever timing and contrasted textures...The late Philip Langridge in one of his last performances at Covent Garden...makes a memorable King of Naples, while Ades's evocative orchestration with its percussion effects vividly conjures up the atmosphere of the magic island of Prospero...A strong and memorable opera

Out-Brittening Britten’s Grimes storm music in the prelude, and the eerily beguiling tintinnabulations of the Magic Banquet music that make the recording so rewarding

Performances are almost all first rate. It's a measure of the strength of the mostly British casting that singers of the quality of Stephen Richardson and Jonathan Summers take some of the smallest roles. Simon Keenlyside's no-nonsense Prospero, a force to be reckoned with from the very start of the opera, is outstanding, and it's hard to think of another singer who could manage the stratospheric writing for Ariel more effortlessly than Cyndia Sieden. Ian Bostridge's Caliban, Philip Langridge's King of Naples, Kate Royal's Miranda and Toby Spence's Ferdinand are excellent, too. It's a fine production, which does full justice to Adès's sometimes remarkable work.

Simon Keenlyside makes an authoritative Prospero, Ian Bostridge’s Caliban tugs at the heartstrings in his radiant Act 2 aria and Cyndia Sieden is phenomenal as a stratospherically high coloratura soprano Ariel.