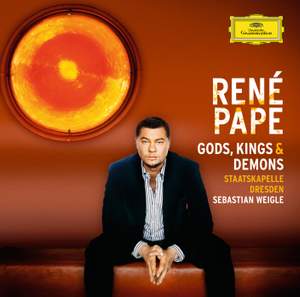 Very welcome on this recording… are less usual arias from Mefestofele… and Dvorák's Rusalka… with brisk support provided throughout by the Dresden Saatskapelle and Staatsopernchor under the... — BBC Music Magazine, November 2008, 4 out of 5 stars More…

Excerpt,  Rubinstein, A: The Demon

Rene Pape’s solo debut for DG gives an overview of the roles that have made his career plus a few rarities.. Accompanied by the Dresden Staatskapelle under Sebastian Weigle, Pape performs his signature piece: King Mark’s monologue from Tristan und Isolde, as well as arias from Gounod’s Faust (the role of Méphistophélès), Mussorgsky’s Boris Godunov and wonderful arias of the rarely performed Demon (Rubinstein) among others. “René Pape is an artist who thrills his audiences with charisma, intelligence and a one-in-a-million voice.” (Opera News)

The operatic roles on this album have to a large extend been performed by Pape to the highest critical acclaim in the world’s major opera houses, from the Metropolitan Opera to the Berlin Staatsoper.

As Pape’s first solo recording and his DG solo debut, this album is long overdue and is eagerly awaited not only by the music press but also by the singer’s international fan base.

Very welcome on this recording… are less usual arias from Mefestofele… and Dvorák's Rusalka… with brisk support provided throughout by the Dresden Saatskapelle and Staatsopernchor under the direction of Sebastian Weigle, this is a fine showcase.

Probably the premier basso cantante of our time, René Pape is a good god, a good king and a still better singer…