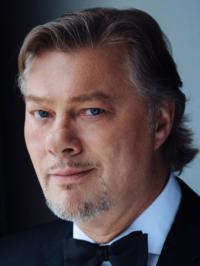 Pape received his musical education with the Dresdner Kreuzchor and the Dresden Conservatory. He debuted with the Staatsoper Unter den Linden in 1988, and achieved international recognition in 1995, when Sir Georg Solti cast him as Sarastro in a production of Die Zauberflöte. The year 1995 also saw his debut with the Metropolitan Opera, where he has performed every year since.

His repertoire includes virtually all the great German bass roles, as well as Ramfis in Aida, Filippo II in Don Carlo, Méphistophélès in Faust, and the title role of Boris Godunov. He made his film debut as Sarastro in Kenneth Branagh's The Magic Flute, which premiered simultaneously at the 2006 Toronto International Film Festival and the 2006 Venice Film Festival.

Find out more at https://en.wikipedia.org/wiki/René_Pape