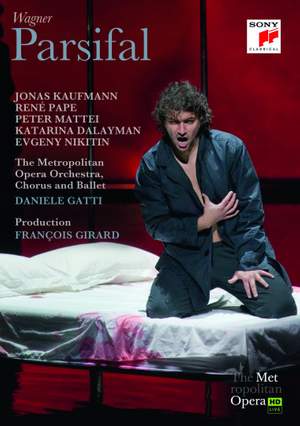 Kaufmann is the Parsifal we've all been waiting for...Matching his agonies are those of Peter Mattei's Amfortas and Katarina Dalayman's lustrous, secure Kundry, while the relaxed, minimal gestures... — BBC Music Magazine, June 2014, 5 out of 5 stars More…

The German tenor gives the performance of his career as Wagner’s ‘Holy Fool’ in François Girard’s production from the Metropolitan Opera, with René Pape as Gurnemanz and Katarina Dalayman as Kundry.

Wagner at first ordained that Parsifal be staged only in Bayreuth, at his own theater. The music drama was introduced there on July 26, 1882, six months before the composer's death. Against the wishes of Wagner's heirs, Heinrich Conried presented the U.S. stage premiere of the work during his first season as general manager of the Metropolitan Opera, in 1903. Protests from Wagner's widow, Cosima, brought the issue to court. Ultimately Conried won, and the Metropolitan's version was hailed by some critics as superior to Bayreuth's. The Met's next new Parsifal production, in 1920, was directed by Richard Ordynski and designed by Josef Urban, whose decors were not replaced until 1956, when the company presented a new staging by Herbert Graf. The Met subsequently offered new Parsifal productions in 1970 (Nathaniel Merrill) and 1991 (Otto Schenk). The company's new staging by François Girard, a coproduction with the Opéra National de Lyon and Canadian Opera Company, had its Met premiere on February 15, 2013, with Daniele Gatti conducting.

“Few better casts could be imagined than the one the Met has assembled here. Jonas Kaufmann is the rare Wagnerian hero you can believe in.” **** Bachtrack

“The conductor Daniele Gatti draws diaphanous playing from the great Met orchestra and captures the shifting currents of this richly chromatic and complex score.”NYTimes.com

“At 43 Mr. Kaufmann is in his glory, equally adept in German, Italian and French repertory. Handsome and limber, he is a natural onstage. The baritonal colorings of his sound, his clarion top notes, the blend of virility and tenderness in his singing, his refined musicianship — all these strengths come together in his distinctive Parsifal.” NYTimes.com

Kaufmann is the Parsifal we've all been waiting for...Matching his agonies are those of Peter Mattei's Amfortas and Katarina Dalayman's lustrous, secure Kundry, while the relaxed, minimal gestures of Rene Pape's Gurnemanz bely the vocal armoury he unleashes in the last Act. Gatti's pacing isn't my ideal...but on its own terms it's remarkable.

The orchestral sound is consistently rich and resonant...The impassioned intensity Jonas Kaufmann brings to Parsifal's music is matched by the rhetorical conviction of Peter Mattei's Amfortas and Evgeny Nikitin's Klingsor...This is very much Wagner for the 21st century.

The cast is magnificent...The biggest revelation is Peter Mattei’s searing Amfortas...[Kaufmann's] transformation from the gauche, feral boy of the first act to the grizzled spiritual leader of the last is masterfully paced...Gatti lets everything unfold in its own time, to luminous, hypnotic effect.

a fine-looking production...Kaufmann’s Parsifal looks and sounds the part and is well-paced. Evgeny Nikitin’s Klingsor seems to enjoy raising the rafters...Peter Mattei’s Amfortas steals the show with his gleaming baritone and anguished acting – a superb assumption.