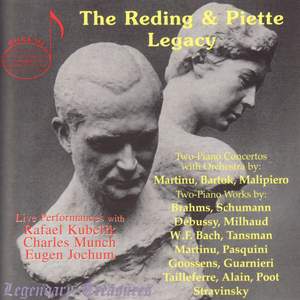 Pasquini, B: Sonata in D Minor

Reding & Piette were regarded as one of the most prominent European piano duos of the 20th century. The famous music critic Emile Vuillermoz observed that the two maestros had established a new and unique solo instrument, "the two-piano". He described their interpretation as "a miracle of sound and creative power that are irresistible". Aloys Mooser indicated that the two musicians could not be surpassed and Stuckenschmidt (perhaps the most demanding music critic ever) described the duo as "two grandiose pianists". In 1956, Reding & Piette were chosen to replace Walter Gieseking at the prestigious Berlin concert series "Master Interpreters". During their 42 year career, they were the foremost interpreters of such contemporary composers as Martinu, Malipiero, Britten, Milhaud, Martin, Hindemith, Katchaturian, Tansman, and Poulenc. Many of them wrote music specifically for the team, and many première performances resulted. Some memorable events included the first performance of Bartok's concerto for two pianos, percussion & orchestra with the Orchestre de la Suisse Romande conducted by Ernest Ansermet in Lausanne and Geneva; the European première of Martinu's concerto conducted by Kubelik at the Festival of Besancon; the première of Poulenc's concerto with the Berlin Philharmonic Orchestra in Berlin and in Tokyo (NHK); the première of the 5th Symphony "in ecco" of G.F. Malipiero with the RAI orchestra conducted by Mario Rossi on tour in England, and the première of the Malipiero concerto conducted by Kubelik in Besancon.