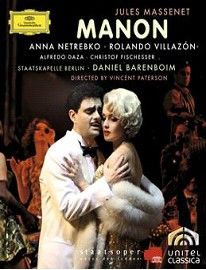 [Netrebko] is a real stage animal, constantly reacting to what is happening around her — Opera More…

Following the artistic and commercial success of their last DVD project, La Traviata from the 2005 Salzburg Festival, opera superstars Anna Netrebko and Rolando Villazón bring their combined talents to Jules Massenet’s Manon. Netrebko was born to play the title role: her voice and body language capturing the fluctuating personality of the complex Manon, one minute girlish, the next introspective. “She is a real stage animal, constantly reacting to what is happening around her”, wrote Opera of her performance. Villazón is compelling as Des Grieux, expressing all the burning passion of the doomed lover in his burnished, supple tenor.

This is a production with a distinct Hollywood touch: first-time opera director Vincent Paterson has previously worked with Madonna, Michael Jackson and Paul McCartney and staged several Broadway musicals. He has already enjoyed great success with his first classical DVD project for DG: The Woman – The Voice featuring Anna Netrebko.

Given his show-business background, Paterson interprets Manon as a Hollywood cinematic tale for the opera stage with Massenet’s colourful music as a kind of soundtrack. The press raved about the opera event of the year in Berlin, while the live public screening of one of the performances in the square in front of the opera house attracted an audience of more than 20,000 people. Musically, the production is equally accomplished.

This is a Manon that will appeal across the spectrum: to lovers of opera, movies and Hollywood. A glittering production filled with beautiful people with gorgeous voices!

[Netrebko] is a real stage animal, constantly reacting to what is happening around her

Villazon (at his finest)...sing[s] gloriously on DG, in a passionate liaison that proves most moving of all...Throughout, Barenboim, (who stepped in at the last moment to conduct) achieves first-class orchestral playing and keeps the tension high, and overall the performance is quite unforgettable.

Anna Netrebko's hoydenish Manon might be a touch blowsy for some tastes, but she's simply bursting with joie de vivre and animal vitality, and her chemistry with Rolando Villazón's nervy Des Grieux is incandescent.