Massenet's best-known works, Werther and Manon, have been as well represented in the recording studio as they are in the opera-house - there are over 70 recordings of each, dating from the 1920s to the present day, and they were particularly well served during the 1950s and 60s (my own favourite Manon, under Pierre Monteux, dates from this period). At least half of his operatic output, however, remains unrecorded or is now only available second-hand: La Navarraise, made famous by Placido Domingo and Marilyn Horne in the 1970s, has sadly lapsed from the catalogue, and Sapho, Cléopâtre and Amadis are likewise no longer available (though individual scenes and arias do crop up on the occasional recital-disc).

During the 1970s, the Australian conductor and musicologist Richard Bonynge did much to rescue Massenet from obscurity: after discovering that the composer had considered Esclarmonde - which had fallen completely off the radar since the turn off the century - his 'finest achievement', he made the first recording of the work in 1974 and subsequently went on to give Le Roi de Lahore its recording premiere. (He had also resurrected the French Revolution melodrama Thérèse earlier in his career). Though there are still plenty of gaps to be filled, Massenet's work is currently enjoying something of a renaissance both on stage and in the studio, with conductors as renowned and diverse as Daniel Barenboim, Valery Gergiev and Antonio Pappano setting down their thoughts on the major works in the past couple of years. 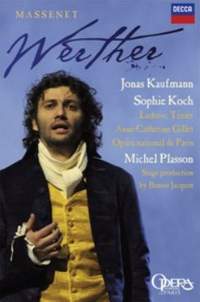 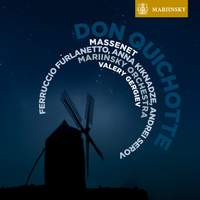 Valery Gergiev's St Petersburg forces might not be especially associated with French repertoire, but they generate tremendous heat and chutzpah in the flamenco-influenced crowd-scenes, and Anna Kiknadze's sultry bronze timbre catches Dulcinée's melancholy as well as her sensuality. The star, though, is Ferruccio Furlanetto's 'knight of the doleful countenance', tempering eccentricity with elegance and heartbreaking, understated pathos. 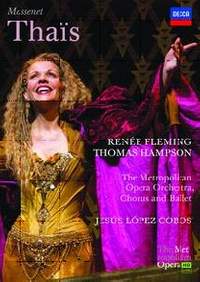 This lavish Met production from 2008 plays up the luxurious exoticism of the work to the hilt. Renée Fleming is voluptuous of voice and appearance as Thaïs, looking appropriately ravishing in Christian Lacroix's gorgeous costumes; Thomas Hampson is a sympathetic, three-dimensional Athanaël, catching the conflicts which drive the character like few others. 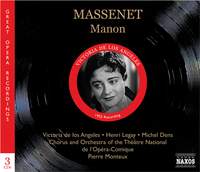 Ever-so-slightly crackly sound on this classic 1955 studio recording is a small price to pay for Victoria de los Angeles's adorable heroine, brimming with charm & in vernal voice. Henri Legay was a new name to me, but his elegant light lyric tenor is capable of packing a punch when needed in the Saint-Sulpice scene; Pierre Monteux shapes the orchestral interludes with Gallic finesse. 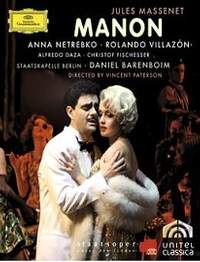 For a complete contrast to my CD choice, try Vincent Paterson's 2007 Berlin production, with Daniel Barenboim in the pit and the action updated to the 1950s: Anna Netrebko's hoydenish Manon might be a touch blowsy for some tastes, but she's simply bursting with joie de vivre and animal vitality, and her chemistry with Rolando Villazón's nervy Des Grieux is incandescent. 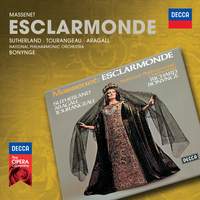 I must mention Richard Bonynge's 1975 account of this 'opéra romanesque' even though it's pretty much Hobson's Choice when it comes to recordings of Esclarmonde: the fiendishly high title-role takes no prisoners, but Joan Sutherland at her peak is fully equal to its demands, nailing high Ds and Es with imperious venom as the Byzantine sorceress. 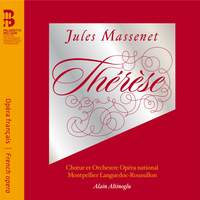 Set during the French Revolution, this rarely recorded 1907 opera languished in obscurity for most of the twentieth century, but is grippingly brought to life here by the compelling vocal actress Nora Gubisch, authoritative baritone Étienne Dupuis as her husband André and the young American tenor Charles Castronovo (who is surely a wonderful Werther and Des Grieux in the making) as her lover Armand. 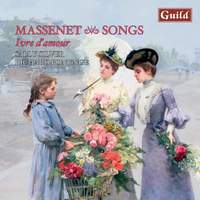 A lovely overview of Massenet's extensive song output, with Richard Bonynge accompanying the South African coloratura soprano Sally Silver - a young singer who shares many of the vocal qualities which Bonynge so loved in his late wife Dame Joan Sutherland. 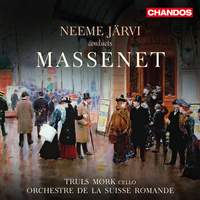 Neeme Järvi conducts the Orchestre de la Suisse Romande in a wide-ranging selection of concertante works, incidental music and the famous ballet-suite from Le Cid in this brand-new release on Chandos.