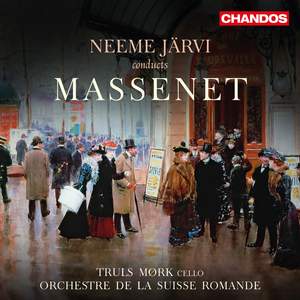 Of the three more substantial items, the two most familiar [Le Cid and the Scenes pittoresques]...are played by Neeme Jarvi and his Swiss orchestra with infectious panache and finesse. — BBC Music Magazine, July 2014, 4 out of 5 stars More…

Massenet: Fantaisie for Violin and Orchestra

Jules Massenet has long been associated primarily with opera, while his orchestral works have gone unappreciated. This collection of overtures, ballet music, and concert pieces, each with its own unique orchestral colour, showcases Massenet’s orchestral writing at its finest. The Orchestre de la Suisse Romande is conducted by its Music and Artistic Director, Neeme Järvi.

From the opening diminished seventh chord of the concert work Ouverture de ‘Phèdre’ it is clear that we are in a world of high drama. Commissioned in 1874 for performance in Paris, it is based on Racine’s play of the same name. Written in the same year, but in complete contrast, is the Scènes pittoresques, full of a grace and elegance that is often reminiscent of Tchaikovsky. The ‘Suite de ballet’ from Le Cid evokes yet another sound world, one of exotic colours and exuberant celebration, its seven movements featuring dance music from different regions of Spain.

Also featured on this disc are a number of works involving a solo cello, performed here by Truls Mørk, one of the pre-eminent cellists of our time. He shines a light on Massenet’s little known Fantaisie for cello and orchestra, a fine piece rarely heard on disc or in the concert hall.

Of the three more substantial items, the two most familiar [Le Cid and the Scenes pittoresques]...are played by Neeme Jarvi and his Swiss orchestra with infectious panache and finesse.

True to form, Järvi has uncovered a collection of minor works by a well-known composer and injected enough sparkle into them to make for hugely enjoyable listening...Järvi is in his element, and his Geneva orchestra responds with spirit and style.

From the moment the curtain rises on the ballet suite from Le Cid you can sense the roar of the greasepaint and the smell of the crowd as the Suisse Romande Orchestra snap into the opening chords...A CD to warm the heart and lift the spirits.