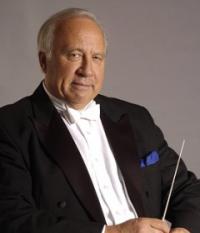 Neeme Järvi, born on June 7, 1937, is probably the best known Estonian in the world.

He graduated from the Leningrad Conservatory in 1960. He is the cofounder of the Estonian Radio Chamber Orchestra in Tallinn and its artistic director.

Neeme Järvi is among the most recorded conductors in the world. Since 1983, 357 CDs have been produced under his baton.

During the last ten and a half years, Neeme Järvi has given 1119 concerts in 125 cities, conducting 72 different orchestras.

Strauss himself may have spoke slightingly of this work (commissioned by Sergei Diaghilev’s Ballets Russes in 1914), but Chris is won over by the range and combinations of orchestral colours, and Järvi’s carefully calculated tempos and tempo relationships.

Recording of the Week,  Tchaikovsky's Sleeping Beauty from Neeme Järvi

A new trilogy of complete Tchaikovsky ballet scores from the veteran Estonian conductor and the Bergen Philharmonic gets off to a glittering start, with outstanding solo contributions from violinist James Ehnes and cellist Robert deMaine.