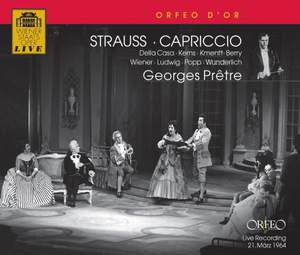 Orchestra of the Vienna...

The sound on the Capriccio release is…lacking in air, although not enough to disturb the memory of Lisa della Casa's assumption of the Countess. To the adjectives attached to her Strauss singing... — Gramophone Magazine, Awards Issue 2008 More…

With its new production on 7th June 2008, the Vienna State Opera revived a long-standing tradition of having the finest representatives of the profession

singing Capriccio. The work was first staged in Salzburg in 1950 in a production subsequently seen in Vienna. Both there and in Salzburg, the Countess was for many years sung by Lisa Della Casa in one of the Strauss roles with which she was most closely associated.

The present live recording is the first official record of this ideal interpretation, with Georges Prêtre in the pit, vividly demonstrating his Strauss credentials.

It virtually goes without saying that the singers who were engaged to appear with Lisa Della Casa were in every way her equals.The difficulty in choosing between poetry and music becomes all the more understandable when the representatives of these two art forms are artists of the stature of Waldemar Kmentt and Walter Berry. Both men were among the company's leading singing actors, bringing to their parts both striking vocalism and an impassioned wooing of the woman on whom they have set their hearts. No less impressive is the American baritone Robert Kerns, whom Herbert von Karajan had invited to join the Vienna State Opera ensemble two years previously and who remained with the company until his premature death at the age of 55 in 1989.As the Count he displays natural charm in his attempts to win the hand of Christa Ludwig's imposing Clairon. Otto Wiener was more of a heroic baritone than either Berry or Kerns, allowing him to bring all the necessary authority to the role of the theatre manager La Roche and to his great address. Last, but not least, are the two 'Italian' singers, whom it would be difficult to imagine better cast today: the young Lucia Popp and Fritz Wunderlich turn Strauss’s witty parody of Italian bel canto singing into a serious highlight.

The sound on the Capriccio release is…lacking in air, although not enough to disturb the memory of Lisa della Casa's assumption of the Countess. To the adjectives attached to her Strauss singing ("creamy", "sumptuous") add the comment that she creates a really broad and passionate character.