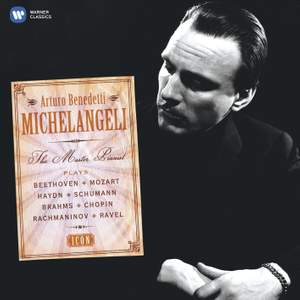 I. Allegro - Cadenza - Tempo I

Arturo Benedetti Michelangeli (1920–1995) was regarded as one of the most commanding and individual piano virtuosi of the 20th century, along with the likes of Horowitz, Rubinstein and Richter. The music of Schumann was a special feature of Michelangeli's repertoire, and his recording of the Ravel and Rachmaninov G major concertos is a truly great recording that has never been out of the catalogues since it was first released in a late 50s. This 4-CD set brings together many of Michelangeli's EMI recordings in a wonderful and wide range of works.