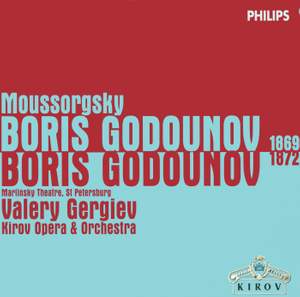 What we have here is, literally, two operas for the price of one. That's to say, the two discs containing Mussorgsky's first Boris Godunov and the three containing his second are available at... — Gramophone Classical Music Guide, 2010 More…

Well, what are you waiting for?

For whom dost thou forsake us?

People of the Orthodox faith

Glory to thee, our Lord

My soul is sad

You have gone on writing

Holy father, for a long time

Can I bring you anything, reverent fathers?

It all happened in the town of Kazan

Why don't you join in the singing?

There he goes-What sort of people are you?

I have achieved supreme power

It is not execution that I fear

What? Is mass over?

What is he weeping about?

What? Let us vote, boyars

It's a pity that Prince Shuisky isn't here

Once, in a deep sleep

Well, what are you waiting for?

For whom dost thou forsake us?

People of the Orthodox faith

Glory to thee, our Lord

My soul is sad

You have gone on writing

Holy father, for a long time

It is the bell for matins

I caught a grey drake

It all happened in the town of Kazan

Why don't you join in the singing?

There he goes-What sort of people are you?

Where are you, my dear husband?

So the gnat was chopping some firewood

I have achieved supreme power

How heavily weights the right hand of the fearful judge

Our little parrot was sitting

My son, my own dear child!

Ah, the most illustrious orator

At the cathedral in Uglich

On the azure Vistula

Captivate the Pretender with your beauty!

Your eyes have started to sparkle with a hellish flame

The wife of that toothless debauchee

It is she! Marina!

But it is not for amorous conversations

You alone, Marina I worship

Leaders from all corners of Russia

O, Tsarevich, I beg you, do nor curse me

What? Let us vote, boyars

It's a pity that Prince Shuisky isn't here

Once, in a deep sleep

Over here! Sit him down on the stump!

The sun and the moon have faded

Glory to you, tsarevitch!

What we have here is, literally, two operas for the price of one. That's to say, the two discs containing Mussorgsky's first Boris Godunov and the three containing his second are available at five discs for the normal cost of three. And, in a real sense, what we're dealing with is two operas.
First, a brief resumé of the facts. In 1868-9 Mussorgsky composed seven scenes: outside the Novedevichy Monastery, Coronation outside the Kremlin, Pimen's Cell, the Inn, the Tsar's rooms in the Kremlin, outside St Basil's Cathedral, Boris's Death in the Kremlin. When these were rejected by the Imperial Theatres in 1872, he made various revisions. To meet objections about the lack of female roles, Mussorgsky added the two scenes with the Polish princess Marina Mniszek; he also substituted the final Kromy Forest scene for the St Basil's scene. He made a large number of adjustments, some of a minor nature, some rather more significant (such as dropping Pimen's narration of the murder of the young Tsarevich), and one huge, the complete rewriting of the original fifth scene, in the Kremlin, sometimes known as the Terem scene. This was the work that he resubmitted, and which was first performed in St Petersburg in 1874. Rimsky-Korsakov's famous version (which does much more than reorchestrate) was first heard in 1896, and for many years superseded its predecessors.
However, it has increasingly been recognised that Boris II isn't a revision of Boris I but a different work, both as regards the view of the central character and his place in the historical narrative, and also as regards the rethought musical technique and sometimes change of idiom which this has brought about. Therefore the present set makes a real contribution to our understanding and enjoyment of Russia's greatest opera. It follows that there have to be two singers of the central role.
Putilin (Boris I) is in general more capacious in tone, more brooding and lofty, in the Terem scene more embittered and harsh, willing to act with the voice. Vaneyev is a decidedly more immediate and human Boris, tender with his son Fyodor (a touching, engaging performance from Zlata Bulycheva) both in the Terem and at the end, not always as dominating as this Tsar should be but sympathetic, allowing his voice to blanch as death approaches, and especially responsive to the melodic essence of Mussorgsky's speech-delivered lines. This enables him to be rather freer with the actual note values. It doesn't necessarily matter that much: Mussorgsky changed his mind over various details, and the important thing is to use his notes to create character rather than be too literal with what the different versions propose.
Pimen, strongly sung with a hint of the youthful passions that he claims to have abjured, is sung by Nikolai Okhotnikov more or less identically in both performances.
The only character, apart from Boris, to be accorded two singers is Grigory, the False Dmitri. Viktor Lutsiuk (Boris I) is strenuous, obsessed, vital; Vladimir Galusin (Boris II) can sound more frenzied, and has the opportunity with the addition of the Polish acts to give a convincing portrayal of a weak man assuming strength but being undermined by the wiles of a determined woman. Here, she's none other than Olga Borodina, moodily toying with her polonaise rhythms and then in full sensuous call.
Yevgenia Gorokhovskaya is a jolly old Nurse in the Boris II Terem scene. The rest of the cast do not really change their interpretations from one Boris to another, and indeed scarcely need to do so: it isn't really upon that which the differences depend. Liubov Sokolova sings a fruity Hostess, welcoming in Fyodor Kuznetsov a Varlaam who can really sing his Kazan song rather than merely bawling it. Konstantin Pluzhnikov makes Shuisky move from the rather sinister force confronting Boris in the Terem to a more oily complacency in the Death scene: many Shuiskys make less of the part. Evgeny Nikitin is a creepy, fanatical Rangoni, Vassily Gerello a Shchelkalov of hypocritical elegance, Evgeny Akimov a sad-toned Simpleton. Gergiev directs strong, incisive performances, accompanying sympathetically and controlling the marvellous crowd scenes well.
However, it's a pity that he allows fierce whistles to drown the speeding violins opening the Kromy Forest scene (the music can be heard only when it returns), and he hasn't been given sufficient clarity of recording with the chorus.
The words are often obscure, even with the boyars in the Death scene, and far too much is lost in the crowd exchanges. This is regrettable for a work that, in either incarnation, draws so much on realistic detail of articulation.
Nevertheless, these five discs form a fascinating set, one no admirer of this extraordinary creative achievement can afford to ignore.