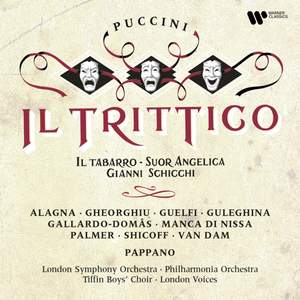 No previous recordings bring such warmth or beauty or so powerful a drawing of the contrasts between each of the three one-acters in Puccini's triptych as these. It's Pappano above all, with... — Gramophone Classical Music Guide, 2010 More…

No previous recordings bring such warmth or beauty or so powerful a drawing of the contrasts between each of the three one-acters in Puccini's triptych as these. It's Pappano above all, with his gift for pacing Puccini subtly, who draws the set together. In each opera he heightens emotions fearlessly to produce unerringly at key moments the authentic gulp-in-throat, whether for the cuckolded bargemaster, Michele, for Sister Angelica in her agonised suicide and heavenly absolution, or for the resolution of young love at the end of Gianni Schicchi. It will disappoint some that the starry couple of Angela Gheorghiu and Roberto Alagna don't take centre-stage, but quite apart from their radiant singing as Lauretta and Rinuccio in Gianni Schicchi – not least in that happy ending, most tenderly done – they make a tiny cameo appearance in Il tabarro as the off-stage departing lovers, a heady 45 seconds. It's the sort of luxury touch that Walter Legge would have relished.
No doubt Gheorghiu would have been just as persuasive as Giorgetta in Iltabarro and as Sister Angelica, but having different sopranos in each opera sharpens the contrasts. Maria Guleghina makes a warm, vibrant Giorgetta, and the touch of acid at the top of the voice adds character, pointing to the frustration of the bargemaster's wife.
Even more remarkable is the singing of the young Chilean soprano, Cristina Gallardo- Domâs as Sister Angelica. Hers is a younger, more vulnerable Angelica than usual. Her vocal subtlety and commanding technique go with a fully mature portrayal of the nun's agony, her defiance of the implacable Princess as well as her grief over her dead son. As with Gheorghiu, the dynamic shading brings pianissimos of breathtaking delicacy. The Princess is powerfully sung by Bernadette Manca di Nissa, her tone firm and even throughout. Felicity Palmer, with her tangy mezzo tone, is well contrasted as the Abbess, and she's just as characterful as the crabby Zita in Gianni Schicchi. The casting in Suor Angelica is as near flawless as could be, with Elena Zilio and Dorothea Röschmann outstanding in smaller roles. Zilio is the only singer who appears in all three operas, just as effective as Frugola in Il tabarro, though there her full, clear voice isn't always distinguishable from Guleghina as Giorgetta. Among the men Carlo Guelfi makes a superb Michele, incisive, dark and virile.
He brings out not just the anger but the poignancy of the bargemaster's emotions, as in the duet with Giorgetta, when they lament what might have been. Neil Shicoff makes a fine Luigi, the nerviness in his tenor tone aptly bringing out a hysterical quality in the character.
The male comprimarios are vocally more variable, if always characterful, as they are too in GianniSchicchi. As Schicchi himself José van Dam's voice perfectly conveys the sardonic side of the character, and the top Gs he has to negotiate are wonderfully strong and steady. Maybe the full voice he uses for the name 'Gianni Schicchi', when in impersonation of old Buoso he's dictating the new will, makes too obvious a contrast with the quavering old man imitation, but it's what Puccini asked for.
Also worthy of praise is the sumptuous and atmospheric sound. Off-stage effects are magical, and always thanks to Pappano and fine playing from both the LSO and Philharmonia, the beauty and originality of the carefully textured instrumentation can be appreciated with new vividness. This is a set to renew your appreciation of operas that represent Puccini still at his peak.