Early-music ensemble Florilegium turns 25 this year - and to mark the occasion they're bringing out a celebratory double album. The first disc comprises Telemann concertos plus the cantata Ihr Völker, hört, while the second presents a selection from their recorded output over the last quarter-century.

I caught up with Ashley Solomon, the ensemble's founder and artistic director, to talk about Telemann and Bach, about where Florilegium have been and about where they're going.

This album marks Florilegium’s 25th anniversary, and clearly the ensemble has come a long way in a quarter of a century – awards, critical acclaim and a firm reputation as one of the leading ensembles in the early music movement. How do you feel your approach to this music has changed since the ensemble’s inception?

I think it’s fair to say that our enthusiasm for this music hasn’t waned over the years but I do feel we approach this music now with more enquiry, obviously more experience and a higher expectation of what we are trying to communicate with each work, than when we first approached this music in the early years. There was novelty back then, perhaps some naivety as well, and we certainly did seem to play everything very quickly indeed, as if we were in a hurry to ingest and then present as much music as possible. In our first few years we naturally gravitated towards the more well-known repertoire as well. I feel it was important for us to establish ourselves in mainstream repertoire, notwithstanding some enjoyable projects of French baroque music that we championed in the mid-1990s. I am thinking of instrumental as well as vocal works by composers such as Campra, Monteclair and Charpentier.

There has also been a natural and healthy turn-over of personnel in the ensemble since our debut in 1991 and with each new core member comes new ideas, new ways of examining and performing the compositions in our repertoire, which is always exciting and challenging at the same time. Florilegium has established its reputation as a chamber ensemble mainly through our belief that all colleagues contribute something unique to the ensemble. In that way each musician feels valued and we certainly encourage an open musical dialogue which I feel has been the key to our success over the years.

Is there any repertoire that you’d be tempted to revisit now, in the light of new developments in musicology since you first started recording?

That is certainly an interesting question, and we have covered so much repertoire in our 25 years of concert performances and recordings. I do firmly believe that all the recordings we have made in our varied discography plots an interesting history in the development of Florilegium. I still feel able to listen to our recordings, even those early, youthful performances, with enjoyment and a sense that the music making was honest and heartfelt, despite our lack of experience, and I’m not sure I would want to re-record many, if any of them again. They seem relevant today as they felt relevant when we recorded them.

Of course a major part of any ensemble’s development has to be research into repertoire (especially in our field of period performance), but as well as discovering new repertoire (Bolivian Baroque Music), we also regularly return to some old favourites, the Brandenburgs and Orchestral Suites by Bach for example, works that have been in our repertoire since our debut concert in July 1991 at Blackheath Concert Halls in London. It was the complete Brandenburgs that I chose to present at Wigmore Hall a few months ago to celebrate our 25th anniversary, repertoire that stands the test of time and seems even more exciting to play now than it did all those years ago when we were starting out.

The nature of our concert work does lend itself to revisiting repertoire and we do find that certain programmes we perform are popular each season. We do notice a change in approach to some of this repertoire, and occasionally this new perspective might be a result of us maturing, but that really would be too simplistic a reason. I believe that the music we play evolves over time, as we do and in the right combination, our live performances allow us to breathe fresh life into some of these old favourites without looking to change the language of our interpretations too radically.

Alongside the Telemann disc, you’ve included a second disc of highlights from the ensemble’s story so far – how did you decide what to include on this, and (if it’s not an impossible question!) do you have a particular personal favourite piece or movement?

With this being our 25th anniversary season I wanted to include something alongside the Telemann concerti and so sought to present a sort of recital disc with this new release. Our previous compilation CDs were used almost exclusively for marketing purposes, acknowledging our 10th and 20th anniversaries, and were very much seen as “Flori's greatest hits”, lots of short tracks, giving a snapshot of our discography and breadth of repertoire to tempt promoters and Festival directors.

This new compilation of course contains highlights of our recording story so far, but I limited it to 16 tracks from 16 different CDs and plotted the order very carefully so the listener could sit down and experience a cohesive recital. The opening track is actually taken from a live recording of the Christmas Oratorio we made whilst touring the programme with our expanded forces and the Florilegium choir in the Canary Islands back in 1994. I stumbled across it a year or so ago and it has never appeared on one of our CDs before, but the chorus 'Herrscher des Himmels' is so infectiously joyous that I couldn’t resist it. Of the 16 tracks five are by JS Bach and three by Telemann ("that’s half the tracks!" I hear your readers complain), and the remaining tracks are by Couperin, Pergolesi, Vivaldi, Leclair, Haydn, CPE Bach, Monteclair and Chavarria.

As to a personal favourite, well that’s easy. We recorded our CD of music from Telemann’s Tafelmusik back in 2002 and my favourite track on this new compilation has to be the Conclusion from the Overture and Conclusion in E minor from Part 1. My wife was expecting our second child at this time and managed to go into labour and safely deliver our daughter Mollie on day two, in the one session during the three days of recording that I was not needed. I dedicated this CD to Mollie for her perfect timing and it is still my favourite recording.

The notes accompanying the Telemann concertos refer to the influence of the composer’s time in Poland, and the adoption of various elements of Polish music in his writing. In general, discussion of “schools” in the Baroque has been in terms of the French, German and Italian styles; do you think the traditions of what we’d now consider Eastern Europe have been overlooked?

Very much so. We naturally talk of the international styles of baroque music by composers from France, Germany and Italy in the same breath and so easily forget other nations who have left their indelible mark with their numerous outstanding compositions. We must also not forget our English composers of course and their particular style of writing, especially those seventeenth-century masters such as Purcell, Blow and Lawes to name just a few. However, if we look briefly at the former Austrian Empire and especially the music from the Czech lands and Poland, here we have a musical culture and style that was unique to this geographical region. Rustic music in Bohemia and Moravia is what made such an impression on Telemann during his visit to Sorau in the early eighteenth century. In his autobiography he wrote that “if you listened carefully you could pick up enough ideas from them in a week to last you a lifetime.”

In recent years this balance has started to be redressed thanks to a number of musicologists who have done some invaluable research in this area. I am thinking particularly of recent published papers and books looking in more detail at the court music in Moravia and the Habsburg Empire, as well as the whole area of musical culture and style in what is now the Czech Republic. We are beginning to explore the music from Kroměřiž, music by the Moravian composer Finger, and works by Biber, Muffat and Schmeltzer are no longer relegated to the unusual and niche markets, but appear in more mainstream Festivals and are being embraced by period and modern players alike. All good news.

You also mention the way Telemann was, in his day, much more highly-regarded than Bach – a situation that today is comprehensively reversed. Do you feel this complete reversal of Telemann’s fortunes is fair – and how do you think it came about?

I’m not sure I entirely agree with you that this reversal of fortunes is so comprehensive these days. Telemann’s enormous published output in the eighteenth century made musical scores more easily available to music-lovers from all strata of society. His richness of melody, uncomplicated musical textures and a willingness to develop his musical style to conform to changing public taste certainly made him an important and popular composer at the time.

Bach’s compositions were often limited to the structures of known genres and stylistic idioms he inherited, although his music was unparalleled for its inventiveness. His music always seems fresh and highly creative and there is an intellectual component to his music, a logic that fascinates musicians and non-musicians alike. Interestingly Bach’s audience at his death consisted of a few sons and faithful students, but his reputation is unique in that sense, as he may be the only composer who died without a reputation but who seems to have been resurrected with such devotion one hundred years later by a generation whose musical tastes and practices he could never have anticipated. Bach is now considered one of the towering geniuses of Western music, whilst Telemann is remembered mostly because of his prolific output.

Their compositions cannot really be easily compared. Bach’s reputation these days is built on his exceptional large-scale works - the great Masses, Passions and larger scale cantatas as well as his great collections including the Six Brandenburg Concertos, Four Orchestral Suites, the Musical Offering, Art of Fugue, cello suites and violin sonatas and partitas. These of course have garnered him an enviable reputation. However, Telemann’s strength lies in his numerous smaller-scale works including over 700 instrumental works (concertos, suites and sonatas), and over 1,700 small-scale sacred cantatas.

However he is now also gaining a reputation for nearly 50 operas that were composed over three decades. His inventiveness through unusual combinations of instruments, colours and his exceptional chamber works (a genre that Bach generally avoided) has given him considerable airplay these days and has encouraged us to release our new recording this month, our seventh recording of Telemann’s works. From my perspective both composers have unique things to offer musicians and audiences alike. Far from being eclipsed, Telemann currently leads Bach seven to five in Florilegium’s discography! 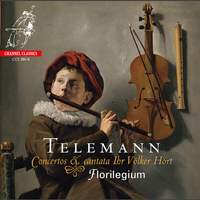 Other recent recordings from Florilegium 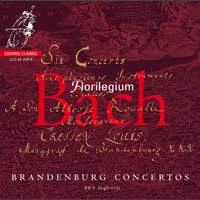 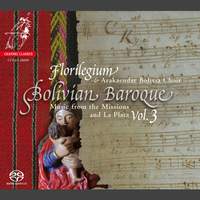 The third volume of Florilegium's exploration of the Baroque music of Bolivia, with the Arakaendar Bolivia Choir. ''There isn't a dull moment during the disc's hour-long duration, and plenty of musical subtleties and novelties to intrigue the ear.'' – Gramophone Music Magazine