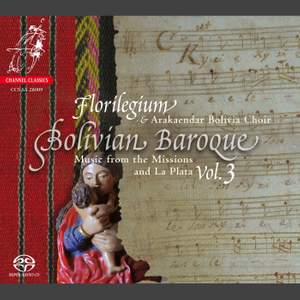 Music for the Mission and La Plata

The sound is captivating - wholly unmannered, fresh-toned and inexhaustibly animated...Their commitment, enjoyment and communication is palpable...the music itself is totally absorbing from beginning... — BBC Music Magazine, April 2010, 5 out of 5 stars More…

Welcome to our third volume of Bolivian Baroque music which was, unusually, recorded in three different venues, in two different countries almost 6250 miles apart. This time the majority of the cd was recorded in Holland during Arakaendar Bolivia Choir’s first tour of Europe with Florilegium in 2008. In addition we have included a number of solo organ pieces from the Bolivian archives which James Johnstone recorded on the restored anonymous 18th century Blockwerk organ in the Mission Church of Santa Ana de Chiquitos. This is the first European recording on this remarkable instrument, its raw sound recorded here for posterity.

The sound is captivating - wholly unmannered, fresh-toned and inexhaustibly animated...Their commitment, enjoyment and communication is palpable...the music itself is totally absorbing from beginning to end.

Florilegium plays some chamber instrumental works with customary finesse...The Bolivian singers demonstrate a warm choral sonority and soft solo singing...There isn't a dull moment during the disc's hour-long duration, and plenty of musical subtleties and novelties to intrigue the ear.