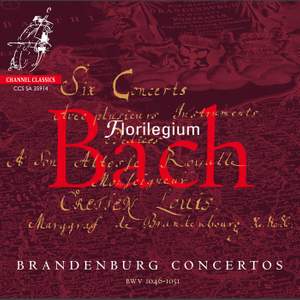 One of the UK’s finest baroque ensembles give their unique take on the Brandenburg Concertos Like many of Bach’s sets, such as the Goldberg Variations or The Well-Tempered Clavier, the Brandenburg Concertos form a kind of master anthology, a demonstration, really of all the imaginable possibilities inherent in a certain musical form. Each of these six concertos calls for a different combination of soloists, every one unprecedented in its choice of instruments and still without parallel today. Since the Brandenburg Concertos were never meant to be performed as a continuous set (which would have side-lined most of the players and exhausted the listeners), their order is of little importance, although there was a certain logic for Bach’s presentation copy to have led off with the most elaborate and to have ended each half of the set with the comfort of strings. Our recording goes in reverse of the numbered order, so that each piece adds to our musician complement. (Ashley Solomon, from liner notes)

Regular performances in some of the world’s most prestigious venues have confirmed Florilegium’s status as one of Britain’s most outstanding period instrument ensembles. Since their formation in 1991 they have established a reputation for stylish and exciting interpretations, from intimate chamber works to large-scale orchestral and choral repertoire. Florilegium regularly collaborate with some of the world's finest musicians including Dame Emma Kirkby, Robin Blaze and Elin Manahan Thomas.