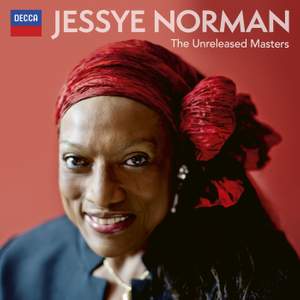 Decca Classics is proud to announce Jessye Norman – The Unreleased Masters, showcasing never-before-heard recordings of one of the greatest classical singers of all time. The set includes an extraordinary performance of Tristan und Isolde with Ms. Norman performing the multiple roles of Isolde and Brangäne, Wagner and Strauss song cycles, and a live recording of an eclectic programme of cantatas by Haydn, Berlioz and Britten.

Released with the support of Ms. Norman’s family and estate, the box set pays tribute to one of the exceptional vocal performers of recent times, one of the most wide-ranging and committed artists, and certainly one of classical music’s great personalities. Born in segregated Georgia in 1945, Jessye Norman became one of the most celebrated opera singers and recitalists in the world, with her four-decade discography amassing five Grammys, including the Lifetime Achievement Award.

Ms. Norman’s continuous pursuit of excellence, combined with a relentless work ethic and schedule, meant many recording projects of extremely high standards were never finalized in her lifetime. As the long-standing Head of Philips and Decca Classics Costa Pilavachi writes in the booklet note:

“A perfectionist, Jessye was hardest on herself and she struggled to get everyone to help her achieve the highest possible standards. Some recordings took years to reach the public and some were never released, although this set rectifies some of these omissions.”

The immense emotional range of Jessye Norman’s voice is demonstrated by a remarkable recording of highlights from Wagner’s Tristan und Isolde in which Ms. Norman uses studio dubbing to perform both the roles of Isolde and Brangäne. Recorded with Kurt Masur and the Leipzig Gewandhaus Orchestra in 1998, the recording features Thomas Moser as Tristan and a young Ian Bostridge as the Seemann.

Jessye Norman’s 1982 recording of Strauss’s Four Last Songs is frequently regarded as one of classical music’s greatest all-time recordings. On this new release, listeners will hear a fascinating alternative 1989 recording of Norman performing the work, this time with James Levine and the Berliner Philharmoniker, paired with a 1992 recording of Wagner’s Wesendonck Lieder.

The final disc of the three-CD set contains a 1994 live recording of Ms. Norman with Seiji Ozawa and the Boston Symphony Orchestra. Spanning repertoire from the Classical and Romantic eras and the twentieth century, the programme of cantatas is bound together by the theme of ancient queens, containing Haydn’s Scena di Berenice, Berlioz’s Cléopâtre ­and Britten’s Phaedra.

Jessye Norman won the ARD International Music Competition in Munich in 1968 and made her operatic debut the following year at the Deutsche Oper, Berlin. As well as becoming one of the most in-demand opera and concert singers in the world, Norman’s artistry reached audiences outside the classical world, performing at the inaugurations of Presidents Ronald Reagan and Bill Clinton, for Queen Elizabeth II for her 60th birthday celebrations at the Royal Opera House, Covent Garden, and La Marseillaise for world leaders on the 200th anniversary of the French Revolution. Among other charity and outreach projects, (and The Rachel Longstreet Foundation) established the Jessye Norman School of the Arts in Augusta, Georgia in 2003 to provide tuition-free arts education for economically challenged youth.

The integrity and depth of Norman’s performances were best characterized by the New York Times:

“This is an amazing voice, a catalog of all that is virtuous in singing.”