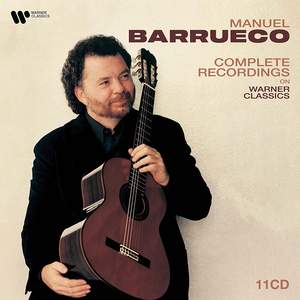 Lennon & McCartney: Here, There and Everywhere

Lennon & McCartney: The Fool on the Hill

Lennon & McCartney: Lucy in the sky with diamonds

Lennon & McCartney: You've Got to Hide Your Love Away

Visée: Guitar Suite No. 11 in B minor

Internationally recognised as one of the most important guitarists of our time, Manuel Barrueco has become renowned as a recitalist, concerto soloist, and chamber musician of the highest level for decades.

His supreme musicality, his mastery, precision, finesse, the richness of his sound palette, the extent of his repertoire – from baroque to contemporary and popular music – have earned him acclaim on the most prestigious stages around the world.

This box-set brings together his entire legacy for Warner Classics and bears witness to his unique artistry which prompted the New York Times to write of him: “…a warmth and a singing quality that would undoubtedly have made Segovia smile”.

Born in Cuba in 1952 Manuel Barrueco began playing the guitar at the age of eight and attended the Esteban Salas Conservatory in his native Cuba. He immigrated with his family to the United States in 1967 as political refugees.

In 1974, at the age of 22, he became the first classical guitarist to receive the Concert Artists Guild Award. The same year he made his debut at Carnegie Hall.

His skills and musical interpretation, his infallible technique, his mastery of sound, his unique artistry made him an seminal guitarist in the same vein as Andrès Segovia, Julian Bream, John Williams... Ever since, Barrueco has toured extensively, appearing in some of the world's most important musical centers, including Royal Albert Hall in London, Wiener Musikverein, Concertgebouw in Amsterdam and Berliner Philharmonie.

His commitment to contemporary music and to the expansion of the guitar repertoire has led him to collaborations with many distinguished composers such as Arvo Pärt and Tōru Takemitsu, whose last orchestral work Spectral Canticle was a double concerto written specifically for Manuel Barrueco and violinist Frank Peter Zimmermann.

As a teacher at John Hopkins Peabody Institute he has a significant influence on the next generation of guitarists.

The set gathers the complete legacy for EMI now Warner Classics and covers all facets of his versatile art: