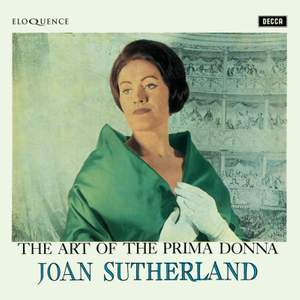 New, The Art of the Prima Donna

Sutherland's sensational debut recital album, long unavailable on its own, reissued with photographs and rarely seen costume designs for the soprano's signature roles. When these recordings first appeared, Joan Sutherland was on the brink of a spectacular international career; just behind her was the sensation of her Royal Opera debut in Lucia di Lammermoor, early in 1959, by the end of which she had operatic London at her feet. Initially released as a pair of albums but soon enough compiled together, they were made in Kingsway Hall in the summer of 1959, and they caused a stir all of their own.

This was due not only to the extraordinary focus of Sutherland's soprano, her fearlessly assured negotiation of wide intervals and her immaculate breath control, but to the carefully chosen repertoire which, as the titling informed its first listeners, was conceived as a homage to the art of soprano singing and some of its outstanding representatives.

These were listed out, as they are in the booklet for this reissue: from Mrs. Elizabeth Billington singing Arne through Giuditta Pasta (Bellini's Norma), Maria Malibran (Rossini's Semiramide), Jenny Lind (La sonnambula), Nelly Melba (Thomas's Hamlet) and so on.

The recital also sought to give the unspoken assurance that Sutherland belonged in this exalted company: a bold move at this relatively early stage in her career when notable debuts still awaited her (such as the Met, where she proceeded to bring the house down in 1961 with Lucia) but amply justified by the album's artistic and commercial success, and fulfilled by posterity.

All the same, since her arrival in London as a student in 1951, accompanying her own practice with a junkshop piano she found around the corner from her bedsit in Notting Hill, Sutherland had painstakingly trained for this point in her career. Already in 1952 she sang Clotilde to the Norma of Maria Callas, and the Greek soprano encouraged her to take on the title role in due course. 'One of these days you can sing it,' Callas said to Sutherland, and The Art of the Prima Donna duly demonstrated that, indeed, she could.

Compared to Lucia and Norma, I puritani was almost unknown at the time unstaged in London since the previous century and Sutherland's intensely engaging portrayal of Amina helped as much as anything to restore this jewel of bel canto to the repertoire. The album is full of such defining moments, both for Sutherland's career and for the revival of an operatic heritage embodied by the divas to whom she paid homage on this album.

"Let me say straight away: she triumphs! The range of this recital is extraordinary. Perhaps the most remarkable feature of it is the new sweetness and beauty of tone." Gramophone, December 1960

"More than an hour and a half of fabulous soprano agility and beautifully focused voice production worth having not only for its intelligently varied musical content, but as a document of an artist on the verge of supreme accomplishment Miss Sutherland shows herself to be a sovereign artist of our day" High Fidelity, November 1961

"I would not hesitate to say that the Arne, Handel, Rossini, and Meyerbeer arias are among the very best vocal performances every committed to disc a superb reissue. No opera lover should be without it." Fanfare, May 1986