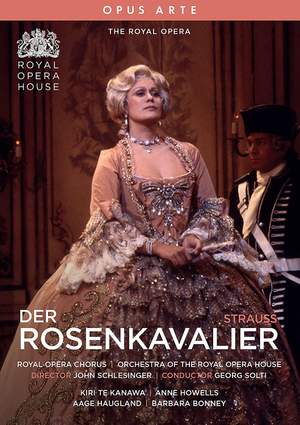 This opulent production by Oscar-winning film director John Schlesinger, filmed in 1985, marked the 25th anniversary of Sir Georg Solti's spectacular debut at Covent garden, conducting this very opera. It also features Kiri Te Kanawa as the Marschallin, performance of which The Financial Times said, 'This deserves to be ranked...among her finest achievements.' Anne Howells gives a sensitive performance as the 'Knight of the Rose'; Aage Haugland is the roguish Baron Ochs, and the International Herald Tribune described American soprano Barbara Bonney as '...an enchantingly vulnerable Sophie, as lovely to hear...as she is to behold'.