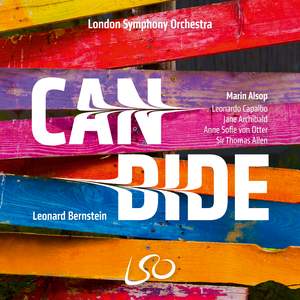 In the title role, Leonardo Capalbo offers charm, delicacy and a touch of melancholy. Jane Archibald makes an amiable Cunegonde, though her showpiece ‘Glitter and be gay’ doesn’t sparkle enough.... — BBC Music Magazine, Christmas 2021, 3 out of 5 stars (Performance) / 4 out of 5 stars (Recording) More…

The Best of All Possible Worlds

"What is he doing to my sister?" - Candide Begins His Travels

It Must Be So (Candide's Meditation)

"Candide, liberated by the battle"

Glitter and Be Gay

"Suddenly, Candide rushes in" - You Were Dead, You Know

"Senor, I must take advice"

We Are Women (Polka)

"Meanwhile, Candide stumbles on through the South American jungle" - Alleluia

"Having arrived in Surinam"

"Of course, the ship sinks"

"Cunegonde!" - You Were Dead, You Know (Reprise)

Universal Good (Life is Neither) - "Come, cast aside all vain speculations" 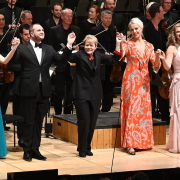 Marin Alsop conducts the London Symphony Orchestra in a new recording of Leonard Bernstein's comic operetta based on Voltaire's satirical novella, in a performance that is full of dry wit, absurd humour, and stirring optimism.

“The best of all possible productions” - The Telegraph

“The rhythms snapped and crackled, the colours were bright and the energy didn’t flag” - The Times “Marin Alsop conducted a lively LSO in music the orchestra must have in its bones” - Financial Times “A hundred per cent irresistible” - Bachtrack

In the title role, Leonardo Capalbo offers charm, delicacy and a touch of melancholy. Jane Archibald makes an amiable Cunegonde, though her showpiece ‘Glitter and be gay’ doesn’t sparkle enough. Anne Sofie von Otter has considerable fun with the Old Lady.

It's fascinating to hear the different approach that Alsop takes in general. Gone is a lot of the madcap mayhem and manic energy of Bernstein's account, replaced by a more easy-going vibe that arguably gives the music more room to breathe…Capalbo impresses in the title role…For me, though, it is the ladies who steal the show: Jane Archibald as Cunegonde is deftly acrobatic in the vocal fireworks of "Glitter and Be Gay", while Anne Sofie von Otter gleefully hams it up as the single-buttocked Old Lady