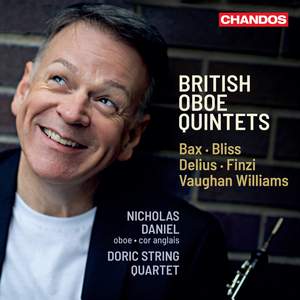 I. Adagio "Lovely on the Water"

IV. Lento "Shoe Borrowed Some of Her Mother's Gold"

V. Andante "The Lady and the Dragoon"

VI. Allegro "As I Walked over London Bridge"

The legendary British oboist Leon Goossens inspired all the composers represented on this recording, and all but one of the pieces were written for his oboe, on which he premièred the works by Delius, Bax, Bliss, and Finzi. The piece by Vaughan Williams is arranged for cor anglais, but it was on his own precious instrument that Goossens would première Vaughan Williams’s Oboe Concerto, in 1944. Nicholas Daniel has, with special permission from Goossens’s daughter Jennie, recorded Delius’s Two Interludes on Goossens’s (now 110-year-old) oboe, rather than his own modern oboe, and contributes a fascinating booklet note on the influence and experience of playing this instrument.

to hear them played by Nicholas Daniel on Goossens’s original Lorée instrument gives us a unique insight into the older player’s expressive world.

The warm, liquid tone which Daniel draws from all three instruments (cor anglais, Leon Goossens's 110-year-old oboe and his own modern model) is a constant source of pleasure throughout, and contrasts effectively with the muscular, at times astringent sound of the Dorics, who summon a near-orchestral weight in the outer movements of Bliss's Oboe Quintet from 1926.

Daniel’s creamy tone and unfailingly elegant phrasing are beautifully matched to all this music, and he and the Doric make strong cases for at least three of the works here – the quintets by Bax and Bliss, and Finzi’s beautiful Interlude.