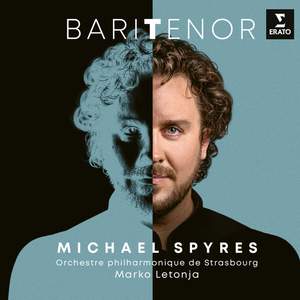 Spyres has a remarkable range and is a consummate vocal chameleon too...in a truly remarkable finale to his ‘Largo al factotum’, Rossini’s Figaro is indeed all things to all men vocally. What... — BBC Music Magazine, November 2021, 5 out of 5 stars More…

Wagner: In fernem Land (from Lohengrin)

The American singer talks to Katherine about moving between tenor and baritone repertoire on his new album, and why he believes that the fach system often 'does our voices and artistry an injustice'. 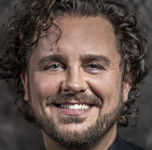 The maverick American singer mixes tenor and baritone repertoire with joyful (but historically-informed) abandon, ranging from Donizetti's stratospheric Tonio to his namesake in Leoncavallo's Pagliacci.

An album with a mission to defy classification, BariTenor is a tour de force for Michael Spyres. It ranges wide, encompassing repertoire normally assigned to both tenors and baritones. Programming 18 arias by 15 composers, it covers three centuries of opera in Italian, French and German, setting mainstream works beside relative rarities, and rediscovering Étienne Méhul’s Ariodant, first heard in 1799. Michael Spyres has achieved renown as a multi-faceted tenor, but ‘baritenor’ is the term he uses to describe his voice, which balances brilliant high notes with a robust lower register. “Having started off as a baritone, I spent 10 years turning myself into a tenor. Voices like mine have existed as long as opera has existed, and the entire programme of this album is linked by the baritenor technique. I am making an honest attempt to explore the baritenor as a forgotten vocal phenomenon ... For me, this album is more than a dream come true.” Joining Spyres are the Orchestre Philharmonique de Strasbourg under its Chief Conductor Marko Letonja, and the male singers of the chorus of the Opéra du Rhin.

Spyres has a remarkable range and is a consummate vocal chameleon too...in a truly remarkable finale to his ‘Largo al factotum’, Rossini’s Figaro is indeed all things to all men vocally. What Spyres brings to each role here is a pitch-perfect sense of character as he teaches a familiar lesson, that the voice is always in service of the role – however you choose to categorise it.

One can take nothing away from Spyres’s variety of tone, and he’s a quick-change artist moving easily from pathos to comedy, from heroics to seductiveness. Nor can one find weak spots in his technique, which possesses the full arsenal of runs, trills, and high notes.This album is a tour de force that few singers on the present scene could hope to rival.

The range of roles is astonishing, but then so are these performances...Spyres really is a tenor – and a baritone, it seems – who has the operatic world at his feet.

A revelation in equal part of artistic identity and artistic ideals, in the way very few such recordings turn out to disclose…Even more than the pleasure one derives from seeing (as it were) this gallery of characters all personified by the same performer, there’s immense reward to be gained from the splendidly accomplished way in which that performer has brought off such a challenge.

Spyres’s programme is no gimmick or grab-bag of show-stoppers, but a carefully-plotted journey through the evolution of the male zwischenfach voice…And there’s never so much as a hint that he’s pushing his instrument beyond its comfort-zone for the sake of novelty: instead, we’re left with the impression of a singer exploring everything his remarkable voice has to offer.

Most of these 85 minutes of music are staggeringly good. Spyres is unique in my experience; a tenor with a baritone extension...I know baritones with less “ping” in their timbres. He also has huge fun with Figaro’s funny voices...Astounding.

Spyres never barks, and chases after everything with enthusiasm, firmly supported by the conductor Marko Letonja and the Strasbourg Philharmonic Orchestra.