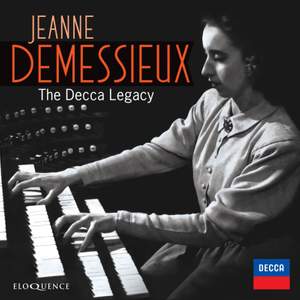 Franck, C: Fantasy in A

Demessieux: Improvisation on a theme submitted by Adrian Beaumont

From her legendary debut through the succeeding years, Jeanne Demessieux brought virtuosity allied to intellect and sensitivity, and went on to become the glory of the French organ school. This 8-CD celebration of one of the instruments most spoken-of, yet enigmatic figures, brings together for the first time her complete Decca recordings and a previously unpublished BBC Radio broadcast, and is released to mark the centenary of her birth. It includes Demessieuxs legendary Franck recordings; her recordings from St. Marks, North Audley Street, London, many released for the first time since the original 78s; little-known recordings of sacred songs with Demessieux accompanying the Belgian soprano, Suzanne Danco; and an improvisation on a submitted theme from the only extant BBC radio broadcast with Demessieux, which also includes Bach, Buxtehude, Widor and Messiaen. The accompanying booklet includes details of Demessieuxs unpublished recordings, rare photos and facsimiles of some of her programs, extensive notes, including details of some of the recording sessions; and notes on the instruments and full specifications for each of the five organs. Jeanne Demessieux is the greatest organist of all generations MARCEL DUPRE Demessieuxs relationship with Decca began in May 1947, just a year after her legendary Paris debut, and this collection of all her commercial recordings spans the whole of her public career. She was one of the first women to achieve stardom in the world of the organ a dimly-lit, often cloistered demi-monde dominated by men throughout its history. Now, a hundred years after her birth, she remains one of the instruments most spoken-of, yet enigmatic, figures. Few organists have ever achieved such fame. In the middle of the twentieth century she was one of the worlds most famous instrumentalists, the undisputed doyenne of organists. 'In the world of the arts, a fairy tale evokes either annoyance or delight. But one must believe it, when the unique and prodigious character happens to be a young lady, 25 years of age, who from the very first moment of her public appearance manifested herself as the irresistible absolute perfection.' LE FIGARO You have before you a very great artist, a magnificent mind, a star of the organ, capable of succeeding me. She will be Im sure of this one of the greatest glories of France. MARCEL DUPRE Next to Jeanne Demessieux we all play the pedals like elephants! MAURICE DURUFLE

Please note: CD 8 is released in physical format only and is not available on digital services.

An indispensable resource for organ aficionados. Five instruments figure and the intensity of articulation, atmosphere and feeling of this recreation of the grand tradition is overwhelming.