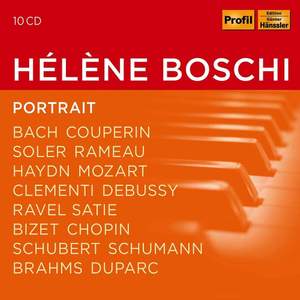 Soler, A: Keyboard Sonata No. 21 in C sharp minor

Soler, A: Keyboard Sonata No. 85 in F sharp minor

No. 7, Singet nicht in Trauertönen

No. 8, An die Thüren will ich schleichen

"The Francophone Swiss pianist Hélène Boschi was born in Lausanne on August 11, 1917. She studied at the École Normale de Musique de Paris with Yvonne Lefébure, and with Alfred Cortot. Throughout her life, Boschi pursued a twin career as teacher and as performer. She taught from 1960 to 1965 at Paris's École Normale de Musique, where she had studied, then went to the Strasbourg Conservatoire, where she directed advanced music classes from 1965 to 1985. She was the first pianist to record the complete piano and chamber works of Clara Schumann. Hélène Boschi's repertoire was broad-based, ranging from the Baroque (François Couperin, Jean Philippe Rameau, Johann Sebastian Bach) to contemporary music. One notable fact about Boschi is that she was the first female pianist to record the works of Padre Antonio Soler (1729-1783), receiving the 1952 Grand Prix du Disque in honour of her achievement. As for the nineteenth century, her passionate readings of Schumann are of the utmost importance. Hélène Boschi was more than a solo recitalist. She played chamber music with notable artists and was an accompanist at the piano. Hélène Boschi died in Strasbourg on July 9, 1990. This 10- CD compilation presents Hélène Boschi as an acclaimed solo pianist, as a chamber musician and as a concert artist and keyboard accompanist."