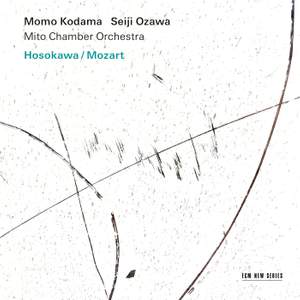 Kodama is a subtle and poetic soloist in both works, in control of a particularly beautiful range of quiet sonorities in the Hosokawa and matching that, in the Mozart, with ‘pouring-oil’ passagework... — BBC Music Magazine, May 2021, 4 out of 5 stars More…

Hosokawa: Lotus Under the Moonlight for Piano and Orchestra

Momo Kodama whose acclaimed New Series solo album Point and Line contrasted Toshio Hosakawa and Claude Debussy here presents the piano concerto which Hosakawa wrote for her, the shimmering Lotus under the moonlight. Composed in 2006, Lotus is also a homage to Wolfgang Amadeus Mozart, with distant echoes of Mozart's Concerto. No 23 in A Major, the work with which it is paired here in a concert recording from Japan, with Maestro Seiji Ozawa and his Mito Chamber Orchestra. In a composer's note Hosakawa writes that "Momo Kodama's transparency, sensitivity and expressiveness have continued to inspire my piano music deeply. As she touches this magical instrument, she touches the mysterious energy of the universe and stirs my soul." "Kodama brings a wonderful capacity for stillness to Hosokawa's often ascetic language...but this is an inventive exploration of both composers." - BBC Music Magazine on 'Point and Line'

Kodama is a subtle and poetic soloist in both works, in control of a particularly beautiful range of quiet sonorities in the Hosokawa and matching that, in the Mozart, with ‘pouring-oil’ passagework and deliciously pearly touch. Seiji Ozawa conducts his Mito Chamber Orchestra, performing with equal attention to detail, translucent textures and a deep sense of affection for the music.

Sensitive to the textures and colours, Kodama finds worthy companions in the Mito Chamber Orchestra under Seiji Ozawa.