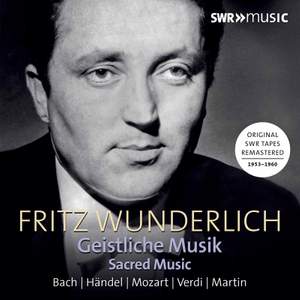 This box set presents Fritz Wunderlich as an interpreter of sacred music, an important and integral part of his profile. Fortunately, a number of his distinguished performances have been preserved, including the complete recording of Bachs St John Passion, excerpts from the Christmas Oratorio, Handels Messiah, Mozarts Requiem & Mass in C minor, and excerpts from Verdis Messa da Requiem. Despite his young age, Wunderlich seemed to have effortlessly mastered even the most virtuoso challenges and the way he used his famous golden voice to master the challenging role of the evangelist in the St. John Passion is truly remarkable. The recording of Handels Messiah presented here was made on 21 March 1959. Wunderlich was the only tenor involved, also singing the arias. The live recording of Mozarts Requiem (21 June 1958) features a stellar cast: apart from Wunderlich, soprano Agnes Giebel, alto Iva Malaniuk and bass Otto von Rohr also took part in the performance. Mozart didnt finish his C Minor Mass KV 427. This live recording from 1957, however, includes the missing parts supplied by court music director Georg Alois Schmitt from Schwerin. He mostly used works or parts of works Mozart himself had written. However, there is one exception: for the Credo, Schmitt used the Crucifixus from Johann Ernst Eberlins Mass No.8.