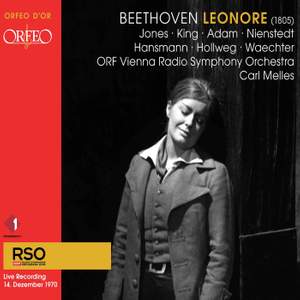 This version of the three-act Leonore (1805) was recorded during a concert performance in the Grand Hall of the Vienna Musikverein on December 14th, 1970. Starring as Fidelio/Leonore and Florestan were Gwyneth Jones and James King, who were incomparable in these roles at the time. The rest of the cast also include outstanding singers of the age, above all Theo Adam as Pizarro, Gerd Nienstedt as Rocco, Rotraud Hansmann as Marzelline, Werner Hollweg as Jaquino and Eberhard Waechter as Don Fernando. At the beginning, there is the Leonore Overture No. 2, thrillingly performed by the Vienna Radio Symphony Orchestra under the baton of Carl Melles.