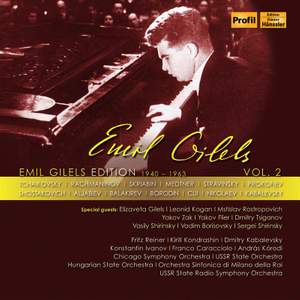 Alyabyev: Piano Trio in A minor

Siloti: Prelude in B minor (after BWV855a, arr Siloti)

Adagio from the ballet “apollon Musagete”

Leonid Nikolayev: Suite for Two Pianos in B Minor Op. 13

"EmiI Gilels ( 1916 - 1985) was born in Odessa / Ukraine. At the age of 16 he won the first AlI-Union Piano Competition . Four years Iater he achieved the first awards at international competitions. He c ame to an arrangement with the Soviet regime. From 1951 onwards, the Soviet authorities allowed Gilels to perform in the West and thus provide an external source of revenue for his country. The first tour of the USA took place in 1955, foll owed by recording contracts with Iabel s in the West. The EmiI Gileis Edition Volume 1 (Profi I Edi ti on Gunter Hanssl er PH 17065) contained just about all the pre-war recordings made by this exc eptional pianist between 1935 and 1941. This 15-CD edition, Volume 2, is dedicated exclusively to Russian/ Soviet composers in recordings made between 1940 and 1963. Fans of Tc haikovsky and piano music in generaI wi11 be excited at the opportunity to compare the two versions of the famous First Piano Concerto - first the ""pure"" Soviet one featuring the Radio Symphony Orchestra of the USSR under Konstantin Ivanov, recorded in Moscow in 1951, and then the famous ""Americ an"" one of 1955 with the Chicago Symphony Orchestra under the baton of its Hungarian taskmaster Fritz Reiner."