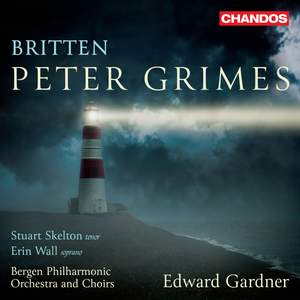 The best feature of this new Grimes is the orchestral playing, similar in tempo and character to Britten’s own recording. Where Edward Gardner really scores is the Bergen Philharmonic’s precision,... — BBC Music Magazine, November 2020, 3 out of 5 stars (Performance) / 5 out of 5 stars (Recording) More…

Prologue: The Truth, the Pity, and the Truth

Act I Scene 1: Oh Hang at Open Doors the Net, the Cork

Act I Scene 1: And Do You Prefer the Storm

Act I Scene 2: Past Time to Close!

Act I Scene 2: Pub Conversation Should Depend

Act I Scene 2: Now the Great Bear and Pleiades

Act I Scene 2: The Bridge Is Down, We Half Swam Over

Act I Scene 2: The Bridge Is Down, We Half Swam Over

Act II Scene 1: Wherefore I Pray and Beseech You

Act II Scene 1: We Planned That Their Lives Should Have a New Start

Act II Scene 1: Swallow, Shall We Go and See Grimes in His Hut?

Act II Scene 1: From the Gutter

Act II Scene 2: Sometimes I See That Boy Here in This Hut

Act III Scene 1: Assign Your Prettiness to Me

Act III Scene 1: We'll Find Him, Maybe Give Him a Hand

Act III Scene 2: To Those Who Pass, the Borough Sounds Betray

‘The burly Aussie tenor is now even more identified with this ill-fated protagonist than Peter Pears, the first Grimes. And everywhere Skelton has sung the part, whether at English National Opera, the Proms, the Edinburgh festival or now on this international tour of a concert staging mounted by the Bergen Philharmonic, the conductor has been Edward Gardner. Theirs is one of the great musical partnerships, and they continue to find compelling new depths in this tragic masterpiece.’ – Richard Morrison – The Times. This studio recording was made following the acclaimed production at Grieghallen, in Bergen, in 2019 (repeated in Oslo and London and reviewed above). Luxuriant playing from the Bergen Philharmonic and a stellar cast under the assured direction of Edward Gardner make this a recording to treasure. Recorded in surround sound and available on hybrid SACD.

The best feature of this new Grimes is the orchestral playing, similar in tempo and character to Britten’s own recording. Where Edward Gardner really scores is the Bergen Philharmonic’s precision, captured in detailed yet natural sound.

In the end this is a recording that is more than the sum of its parts. The chorus and secondary roles are fused into a community at large with all its faults and foibles. Gardner and his cast bring to life the multiple scenes of Borough gossip and suspicion, which are usually the boring part of the opera. In this important respect I’ve never heard better.

The net joy of this new recording is that Skelton, now a Grimes of considerable experience and range, has found in his vocalisation of the role a well-judged mixture of obsessive professional (sometimes rough) fisherman and troubled, confused and persecuted outsider…All this is precisely framed by Gardner’s conducting and his choice of cast…An exciting, committed, necessary and brilliantly recorded version for our times.

Capturing the Grimes of his generation in Stuart Skelton, this recording was always going to be essential...Skelton manages to give the illusion of force that might burst its barriers at any minute—a mirror to Gardner’s dangerous Bergen Philharmonic. Taut and coiled, they play for their lives…And the chorus are right there with them, the engine of a drama whose ebb and flow is dictated by social not natural currents...Wall’s Ellen gleams high above them—a still point of goodness among so much turbulence.

You can practically smell the sea air (and the spit-and-sawdust fug of The Boar) on this wonderfully engineered Grimes, surely one of the most atmospheric accounts on record…Grimes's descent into insanity is interestingly calculated – he’s unusually calm and collected in the opening court-room scene, his composure gradually unravelling with each subsequent micro-aggression from the denizens of the Borough.

Skelton’s Grimes is in the Vickers mould, brutish in his treatment of the apprentice — bloodcurdlingly screamed by Samuel Winter — yet a poetic visionary in his Great Bear monologue, and heartbreakingly vulnerable in the mad scene. Erin Wall as the sympathetic Ellen Orford and Roderick Williams as the apologetic Balstrode are eloquent interpreters…A version to cherish.

Skelton’s tenor is on the heavy side for the role, but he makes a virtue of this...His mad scene is beautifully done…The huge choral forces sound thrilling...This recording is extraordinarily well run-in, and the benefits are plain: even in audio only, it registers as a genuine music drama, the music leading us through the story in one urgent, vital sweep....This insightful recording is up there with this opera’s finest.