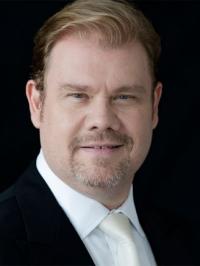 Stuart Skelton was born in Sydney in 1968 and trained in San Francisco and Cincinnati. His breakthrough performance was as Lohengrin at Karlsruhe, and he was soon in international demand for more Wagner (including Siegmund, Parsifal and Rienzi), as well as Beethoven’s Florestan, Britten’s Peter Grimes, Verdi’s Otello, and Laca in Janáček’s Jenůfa.

He is also renowned for his interpretation of Mahler’s Das Lied von der Erde, which he has recorded with Vladimir Ashkenazy, Michael Tilson Thomas and Simon Rattle, and Elgar’s Dream of Gerontius (recorded for Chandos in 2014 – ‘Skelton is an exceptional Gerontius, vocally and dramatically: no phrase is ever sung without meaning’ (Choir & Organ). His discography also includes the title-role in Stravinsky’s Oedipus Rex with Sir John Eliot Gardiner and the London Symphony Orchestra, Schoenberg’s Gurrelieder with Edward Gardner and the Bergen Philharmonic Orchestra (‘Gardner has the thrillingly heroic Stuart Skelton in the work’s most prominent solo part, pouring out his love for Tove in ringing tones’ – The Sunday Times), and Siegmund on Jaap van Zweden’s ‘Hong Kong Ring’ on Naxos (‘Skelton is magnificent throughout, surely without a rival in the role today’ The Guardian).

Awards include Male Singer of the Year at the 2014 International Opera Awards and two nominations for the Olivier Awards’ Outstanding Achievement in Opera prize (for his English National Opera performances of Tristan and Peter Grimes).

Find out more at https://en.wikipedia.org/wiki/Stuart_Skelton

The Australian tenor (currently singing Siegmund in the Royal Opera House's Ring Cycle) talks to Katherine about his career as a Wagnerian and his debut solo recording Shining Knight, recently released on ABC Classics.