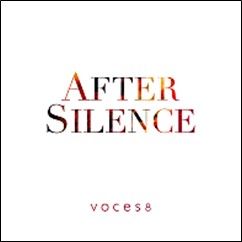 It’s the breadth – not just of repertoire but of sound, technique and approach – that makes it so arrestingly excellent… The musicianship here is dazzling, and nowhere more so than in Britten’s... — Gramophone Magazine, October 2020 More…

Parry: There is an old belief (No. 4 from Songs of Farewell)

Whitacre: A Boy and a Girl

‘After Silence’, the new self-released double-album from VOCES8, celebrates the power of music and voicing the inexpressible. This unique four-chaptered album, inspired by the British writer Aldous Huxley, marks the ensemble’s 15th anniversary and is a major turning point in release strategies for classical music. ‘After silence, that which comes closest to expressing the inexpressible is music’ - Aldous Huxley

As communities around the world have united together through the power of singing, this album celebrates the capacity of the human voice to express our innermost feelings.

A quote from Arvo Pärt nestled in the booklet notes sums this up: 'The most sensitive musical instrument is the human soul. The next is the human voice.'

In the essay from which the title After Silence is taken ‘The Rest is Silence’, Aldous Huxley offers his thoughts on the essential force of music. The most profoundly significant constituents of our being, he says, include our responses to beauty, pleasure, pain, ecstasy and death. These can best be ‘experienced, not expressed’ through silence, and after silence, through music

Huxley’s essay 'The Rest is Silence' from Music at Night and Other Essays (1931), is printed fully within the booklet and is currently not in print elsewhere

After Silence is split into four interlinked chapters that have been released digitally across 2019 and 2020 to mark specific calendar events, a unique way of releasing classical music

The choral works showcased in each chapter, combined with thought-provoking texts and images, relate to the overarching themes associated with the four classical elements, earth, fire, air and water:

o Remembrance, invoking death, loss and the return to earth;

o Devotion, focusing on the flames of love, sacred and secular;

o Redemption, celebrating rebirth and the renewed breath of life;

o Elemental, returning us to the ebb and flow of nature

A collaboration between VOCES8 and other artists including soprano Mary Bevan, the period ensemble Academy of Ancient Music, and oboist Nick Deutsch, showcasing the many different facets of VOCES8’s singing, from pristine ensemble homogeneity to engaging solo consort singing

Awarded the Best Classical Music Education Initiative at the UK Music Teacher Awards, VOCES8 is passionate about connecting people through singing. To provide engaging content during this time, they will release a number of videos to accompany the project on VOCES8’s popular YouTube channel

VOCES8 is a chart-topping Decca Classics artist with an extensive tour schedule throughout Europe, North America and Asia, performing an extensive repertory both in it’s a cappella concerts and in collaborations with leading orchestras, conductors and soloists

It’s the breadth – not just of repertoire but of sound, technique and approach – that makes it so arrestingly excellent… The musicianship here is dazzling, and nowhere more so than in Britten’s Hymn to St Cecilia…Everything has been captured lovingly but truthfully, allowing us to hear the individual voices behind the group’s signature blend. The result is the best thing Voces8 have done in ages. I can’t wait to hear what comes next.