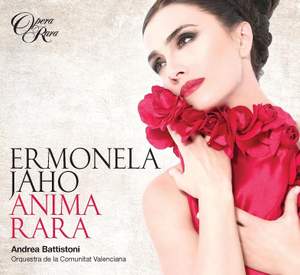 She has a slender tone, definitely more lyric than spinto, and is often so deeply invested in her role that it’s not always a very ‘pretty’ sound. Yet it’s exactly these qualities that are her... — Gramophone Magazine, Awards Issue 2020 More…

The Albanian soprano's debut solo recording on Opera Rara pays tribute to Rosina Storchio, who created the role of Madama Butterfly and was also muse to Leoncavallo, Giordano and Mascagni.

The Albanian soprano talks to Katherine about her debut solo recording on Opera Rara, focusing on the short but remarkable career of Rosina Storchio, who created the role of Madama Butterfly.

Anima Rara, the debut recital album from Ermonela Jaho, explores music championed by Rosina Storchio, one of the most charismatic lyric sopranos of the verismo era. Jaho sings arias from operas including Puccini’s Madama Butterfly, Leoncavallo’s La bohème, Giordano’s Siberia, Mascagni’s Lodoletta and Verdi’s La traviata, accompanied by the Orquestra de la Comunitat Valenciana led by young Italian conductor Andrea Battistoni. Known for performances of searing intensity and emotional truth, Jaho has been described as ‘the world’s most acclaimed soprano’ (The Economist) and ‘one of the great verismo interpreters’ (The Guardian).

She has a slender tone, definitely more lyric than spinto, and is often so deeply invested in her role that it’s not always a very ‘pretty’ sound. Yet it’s exactly these qualities that are her strengths here…Jaho invests each and every role with a sense of drama that translates across the speakers, even though there are no visuals.

It all suits Jaho down to a T. As contemporary reviews, letters and the very few existing recordings of Storchio illustrate, there seems to be an almost uncanny affinity between the two singers in terms of both voice and artistic temperament. Storchio was very far removed from the powerhouse sopranos who’ve taken on some of these roles to great effect since the end of her short but astonishing career, and it’s a real eye-opener to hear this music sung with such delicacy, freshness and introversion.

The Albanian soprano’s voice may not be sumptuous, but her keen alliance of music and text is compelling. One would love to hear her as any of these verismo heroines, but the scene from Lodoletta stands out, idiomatically accompanied by Battistoni and the orchestra.

Past appearances at the Royal Opera House and on the Opera Rara label may have made us more accustomed to her blazing intensity, fruity but well-managed vibrato and rounded, copper-coloured tone colour. Yet the Jaho effect continues to thrill and startle to a singular degree.