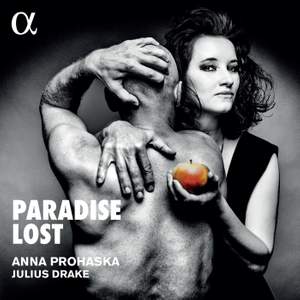 Eve finds her voice as Prohaska and Drake navigate Eden’s bright spots and murkier corners. A heady selection of songs to intoxicate the senses; vivid storytelling and musicality. — BBC Music Magazine, July 2020, 5 out of 5 stars More…

anon.: I will give my love an apple

The gestation of this project lasted two years. Anna Prohaska and Julius Drake finally concentrated their research on the themes of Eve, Paradise and banishment. Some songs were obvious choices, such as Fauré’s Paradis, in which God appears to Eve and asks her to name each flower and animal, or Purcell’s Sleep, Adam, sleep with its references to Genesis. But Anna Prohaska also wished to illustrate the cliché of the woman who brought original sin into the world and her status as a tempter who leads man astray, as in Brahms’s Salamander, Wolf’s Die Bekehrte or Ravel’s Air du Feu. In Das Paradies und die Peri, Schumann conjures up the image of Syria’s rose-covered plains. Bernstein also transports us to the desert with Silhouette. John Milton’s seventeenth-century masterpiece Paradise Lost was the inspiration for Charles Ives and Benjamin Britten, also featured in this very rich programme that constitutes an invitation to travel and reflection.

Eve finds her voice as Prohaska and Drake navigate Eden’s bright spots and murkier corners. A heady selection of songs to intoxicate the senses; vivid storytelling and musicality.

Prohaska’s Eisler is excellent, and we could perhaps do with a whole disc of it...Drake, characteristically, is exemplary throughout, beautifully expressive and always alert to the subtle shifts of meaning of each song. It’s a challenging recital that in some ways surveys a greater subject than can adequately be contained on a single disc. But the best of it is very fine and infinitely rewarding.

This eclectic programme exploring musical depictions of Eve has a wonderful and rather unexpected coherence when experienced in one sitting...Prohaska is especially gripping in the songs more usually associated with male singers, giving febrile, no-holds-barred accounts of Schubert’s Auflösung and Warte, warte, wilder Schiffmann from Schumann’s Op. 24 Liederkreis.