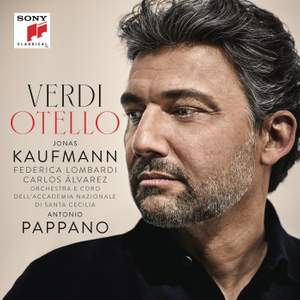 Pappano’s interpretation of Verdi’s penultimate opera makes for an exhilarating ride. This is a conductor in his element, coaxing a performance of thrilling dynamism from the Orchestra dell’Accademia... — BBC Music Magazine, July 2020, 4 out of 5 stars (Performance) / 5 out of 5 stars (Recording) More…

Jonas Kaufmann is now the Otello of this generation. This recording project is the crowning glory of his journey to become today’s key exponent of this legendary role.

Verdi’s Otello is a remarkable four-act opera based on Shakespeare’s play Othello. Otello is considered Verdi’s greatest and most demanding role for the tenor voice. Kaufmann made his debut as Otello in June 2017 at the Royal Opera House to widespread critical acclaim. Kaufmann has won numerous prestigious awards including Gramophone Awards and Echo Klassik Award. Jonas Kaufmann sings an Otello for the ages...

“His sound inescapably evokes memories of live performances and classic recordings by Vinay, Vickers and other masters; in a single night, he joined their company.” – The New York Times

Pappano’s interpretation of Verdi’s penultimate opera makes for an exhilarating ride. This is a conductor in his element, coaxing a performance of thrilling dynamism from the Orchestra dell’Accademia Nazionale di Santa Cecilia…Álvarez is a magisterial Iago…Lombardi is a Desdemona with a voice of astonishing purity and technical control…Kaufmann is at his best when really required to act, in moments of anger or torment…Stars sparkle aplenty here but it is not the most anticipated one that shines the brightest.

Pappano, surely one of this generation’s finest opera conductors, is all of a piece with Kaufmann. The two see the flow of the drama in the same way, and just as Kaufmann is extraordinary in his ability to blend and tie together the emotional (and musical) extremes of the character, Pappano does the same with the orchestral part.

It’s a forceful, visceral reading of the score that packs an irresistible punch, but which could do more to capture the refined lyricism and stately grandeur that are also such essential parts of the work...the tenor bares his dramatic teeth impressively and to powerful effect; he is nobly moving in the final scene. But the characterisation is also held back by the fact that, although he has all the notes and plenty of power, the voice itself sounds short on juice.

This is a welcome release, an Otello with a fine sense of theatre...Kaufmann’s Otello has the shortest of fuses...Lombardi’s Desdemona is no shrinking violet. She sings the Willow Song very well, without affectation...Álvarez is an experienced Iago, a gnarled ensign whose twisted bitterness one can taste...Pappano taps into all the drama and colour of Verdi’s Shakespearian score, really turning the screw in the big Iago-Otello scene.

It’s not Kaufmann’s Lion of Venice which is the main draw here (though he sounds more fully inside the role than he did three years ago at Covent Garden and is supremely moving in his death-throes): you’ll want to hear this for Pappano’s propulsive account of the score with his Roman orchestra, the crackling energy of the opening storm barely abating over the course of the next three hours. Newcomer Federica Lombardi is a luminous Desdemona, and Álvarez exudes motiveless malignity as Iago.

It makes a stronger case for Kaufmann’s assumption of the title role than either of his live stage appearances; the microphones catch his dark, penetrating tone for the opening Esultate and his explosive tirades in close-up...Alvarez is a sardonic foil as Iago, seductive in his narration of Cassio’s Dream. And Lombardi’s Desdemona is outstanding; she is now a youthfully resplendent lyric Verdian...A notable addition to the Otello discography.

[Kaufmann] alternates between a taut, intense tone of anger and certainty and a less tightly focused, more burnished voice full of doubt..[Lombardi's] light and fresh-sounding soprano plays up the young bride’s innocence beautifully...[Iago] sounds properly dangerous as sung by Carlos Álvarez...Pappano’s pacing wrings all the drama out of the music...This Otello may be Kaufmann’s showcase, but it’s Pappano who really makes it sing.

Maybe Kaufmann still isn’t a natural thunderer, lacking perhaps half the brute force usually expected when Otello starts to rage, despite the dark baritone colours at his command. Compensation comes with the expressive power...From the storm-tossed opening scene onwards, Pappano propels his forces with the passion and attention to detail that make him the supreme opera conductor, especially in Verdi.