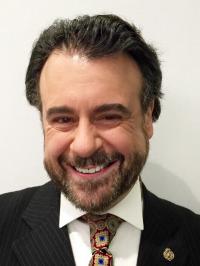 The Spanish baritone Marcelo Álvarez was born in Málaga in 1966, and made his professional debut in Madrid in 1990; he is particularly acclaimed in Italian repertoire, with key roles including Verdi’s Iago, Conte di Luna, Macbeth and Germont (with which he made his Covent Garden debut in 1995), Puccini’s Scarpia, and Carlo Gérard in Giordano’s Andrea Chénier.

Álvarez’s discography includes Ford on Sir Colin Davis’s Grammy-winning recording of Falstaff with the London Symphony Orchestra, Leoncavallo’s I Medici with Plácido Domingo, and (on DVD and Blu-ray) Sharpless in Madama Butterfly and Giacomo in Giovanna d’Arco from La Scala under Riccardo Chailly, the title-role in Don Giovanni from Verona’s amphitheatre, and the title-role in Rigoletto, opposite Marcelo Álvarez (no relation) as the Duke.