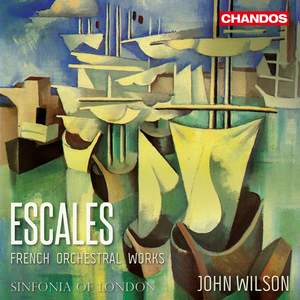 Orchestral players will travel long distances to make music with [Wilson] and this recording shows why…It’s far from being all noise, the woodwind in particular being exquisitely agile…All the... — BBC Music Magazine, April 2020, 5 out of 5 stars More…

The British conductor talks to James about his new ensemble and their first two recording projects of music by Korngold plus a selection of French orchestral works.

John Wilson and Sinfonia of London release their second album, following widespread and universal critical acclaim for their first recording, of Korngold’s Symphony in F sharp. This new recording explores the unique sound world of French orchestral music of the late nineteenth and early twentieth centuries. The programme juxtaposes well-known favourites, such as Debussy’s Prélude à l’après-midi d’un faune, Massenet’s ‘Méditation’ from Thaïs, with pieces far more rarely heard, for example Duruflé’s Trois Danses and Saint-Saëns’s Le Rouet d’Omphale. Many of these works evoke the ‘exoticism’ of Spain or North Africa (as was the fashion in French music of this era), and all share the intricate, detailed orchestration that defines the ‘Impressionist’ style. John Wilson and Sinfonia of London capture the mood and spirit of these pieces with consummate skill and outstanding musicianship. Originally formed in 1955, Sinfonia of London was re-established in 2018 by the British conductor John Wilson to devote itself, at least initially, to recording projects, of which this is the second album.

Orchestral players will travel long distances to make music with [Wilson] and this recording shows why…It’s far from being all noise, the woodwind in particular being exquisitely agile…All the performances are beyond praise and superbly recorded. This is undoubtedly my best disc of the last 12 months.

Wilson has the ability to make familiar music sound wonderfully fresh and new-minted, all the while carefully judging and calibrating the sound world of each piece… The enthusiasm that [he] elicits from his orchestra is very much apparent on every track, though what really impresses is the finesse as well as the virtuosity of the playing, the refinement of detail, the subtlety of texture and colour.

A delightful collection and a real winner.

Wilson’s second disc with his hand-picked Sinfonia of London emulates the recorded collections of Sir Thomas Beecham and is executed with similar technical panache and interpretative flair...The programme is neatly framed by the two French “Spanish” works, and Wilson beautifully captures the colourful instrumentation and specific atmospheres of these impressionist masterpieces.

There’s nothing particularly profound here, but all of the music requires refined, stylish playing, and Wilson and his orchestra can certainly supply that. Their performance of Debussy’s Prélude lays down an early marker of their subtlety, with a wide palette of pastel shades, but the Spanish-inspired pieces by Chabrier and Ravel, show that they have plenty of swagger when it’s needed, too.