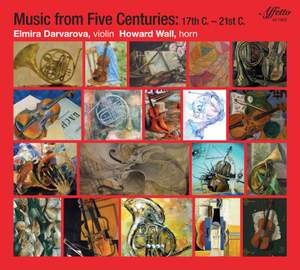 Serebrier: If I Can Stop One Heart from Breaking, I Shall Not Live in Vain

Kitamura, Y: A Bird and a Hawthorn Tree

Villa-Lobos: Bachianas Brasileiras No. 6 for flute and bassoon

Amram: Blues and Variations for Monk, for French horn

Soukhovetski: Postcard from the Edge

Music From Five Centuries: 17th Century - 21st Century,” is a kaleidoscopic presentation of short musical works belonging to a multitude of epochs, genres and styles, from J.S. Bach, Handel, Couperin and Biber, to Mozart and Beethoven, to romantic, contemporary, blues, folk, jazz and rock compositions. Violinist Elmira Darvarova (first and only woman-concertmaster of the Metropolitan Opera Orchestra) and hornist Howard Wall (a New York Philharmonic member, formerly with The Philadelphia Orchestra) have selected, arranged and transcribed a number of compositions (some originals, some transcriptions), to compile a Double Album release, brimming with a large number of world-premiere recordings (40 out of the 45 tracks).