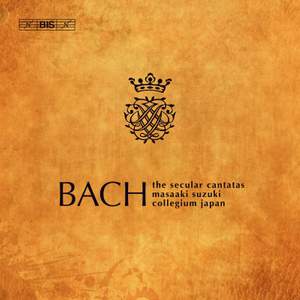 No. 7, Was Luft? was Grab? Soll die Musik verderben

No. 2, Ein Herz, in zärtlichem Empfinden

No. 3, Wie will ich lustig lachen

No. 8, So willst du, grimmger Aeolus

No. 9, Ich will dich nicht hören

No. 2, Ist mein Herz in Missetaten

No. 5, Was die Seele kann ergötzen

No. 7, Ich will dich halten

No. 1, Ich bin in mir vergnügt

No. 2, Ruhig und in sich zufrieden

In 1995 Masaaki Suzuki and his Bach Collegium Japan began the monumental task of recording J.S. Bach’s extant church cantatas – an adventure that was brought to a close 18 years later. But Bach also composed a number of cantatas for secular occasions of which some twenty works have survived intact. Released on individual discs between 2004 and 2018, Masaaki Suzuki’s recordings of these works have now been gathered in a box set, available as a limited edition.

The secular cantatas were written (both the texts and the music) for special events in the family, social, academic or political calendar – a wedding, a birthday celebration, an academic ceremony or a tribute to a prince. Although they were normally only performed once in their original form, Bach was keen to reuse material from them, if the opportunity arose. The best-known examples of using secular arias and choruses with new sacred texts are found in the Christmas Oratorio, for which Bach drew extensively on three festive cantatas written for the Prince-Elector of Saxony and his family. Included in the box is a 156-page booklet with an introduction by Bach specialist Dr Klaus Hofmann (in English, German and French) and the texts of the cantatas with English translations.