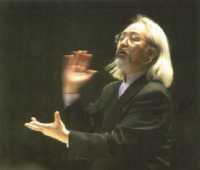 The Japanese organist, harpsichordist and conductor, Masaaki Suzuki, began to play the organ at the age of 12 for church services every Sunday. After graduating from Tokyo University of Fine Arts and Music with a degree in composition and organ performance, he continued to study the harpsichord and organ at the Sweelinck Conservatory in Amsterdam under Ton Koopman and Piet Kee. Having achieved Soloist Diplomas in both of his instruments in Amsterdam, he was awarded second prize in the Harpsichord Competition (Basso continuo) in 1980 and third Prize in the Organ Competition in 1982 in the Flanders Festival at Bruges, Belgium.

From 1981 to 1983 Masaaki Suzuki was a harpsichord instructor at the Staatliche Hochschule für Musik in Duisburg, Germany. Since his return to Japan, he has not only given many concerts as organist and harpsichordist all over the country, but has organized an acclaimed concert series at the chapel of Shoin Women¹s University in Kobe, where a French classical organ built by Marc Garnier is installed.

Find out more at https://en.wikipedia.org/wiki/Masaaki_Suzuki