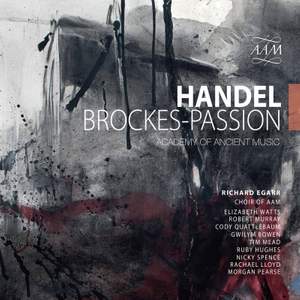 No. 13, Aufs wenigste will ich

No. 57, Was fang ich den mit eurem sogenannten König an?

No. 2b, To the Cross Our Lord Is Bound

No. 3b, When Jesus at the Table Sitting

No. 7b, This Is My Blood of the New Testament

No. 9b, As the Hart Pants After Pure Streams

No. 11b, Should the Whole World at Once Forsake You

No. 12b, Th'Event Is Certain... I Will Smite the Shepherd

No. 15b, The Heavy Load of Sins Oppress Me

No. 62b, Behold the Love of God Towards Us

The conductor talks to David about his recording of Handel's visceral Passion setting, which was taken from a live performance at the Barbican on Good Friday 2019 and released on the Academy of Ancient Music's own label last autumn.

Recording of the Week,  Handel's Brockes-Passion from Richard Egarr and the Academy of Ancient Music

Using a new performing edition by oboist Leo Duarte, the Academy of Ancient Music and some exceptional young soloists make a compelling case for Handel's visceral 'Passion-Oratorio' on the 300th anniversary of its premiere.

This release celebrates the 300th anniversary of Handel's great Brockes-Passion: a long-neglected masterpiece by this most brilliant composer. Richard Egarr and the Academy of Ancient Music are joined by a stellar line-up of soloists in this recording, the culmination of two years of scholarly research. To create its new edition of the score (Handel's original being long-lost), the Academy of Ancient Music assembled a team of scholars and musicologists from the University of Oxford, University of Cambridge, King's College London and more, to work alongside Music Director Richard Egarr and editor Leo Duarte. Consulting 15 manuscript sources from 11 collections in 5 countries, they have produced the most substantial edition of this work yet, including as appendices extra movements and Charles Jennens' partial English translation in their world premiere recordings. A deluxe 220-page album booklet accompanies this release, featuring new contemporary artworks inspired by Handel's Brockes-Passion, full notes, the first contemporary publication of the original Kurrentschrift text alongside the modern German libretto and a brand new English translation, several additional articles, details of other composer's take on Brockes' visceral libretto, and much more. This album is perhaps the most definitive guide to this astonishing work yet published. Soprano Elizabeth Watts takes the limelight as the Daughter of Zion, with tenor Robert Murray and bass-baritone Cody Quattlebaum as Evangelist and Christ respectively. They are joined by Tim Mead as Judas, Gwilym Bowen as Peter, and Ruby Hughes, Rachael Lloyd, Nicky Spence and Morgan Pearse as Faithful Souls, amongst others. The Academy of Ancient Music, and the Choir of AAM, recorded this new release around a 300th anniversary performance on Good Friday 2019 at London's Barbican Hall. The Academy of Ancient Music's exploration and re-discovery of Handel's Brockes-Passion has been a fascinating journey of discovery that is only the beginning, in the modern era, for this major work of Handel's. "A gruesomely graphic work to break Bach's monopoly" (Financial Times)

Every vocalist is very good to excellent; top honors go to Elizabeth Watts as the finest Daughter of Zion on disc, a role to which Handel allots about 40 per cent of the score. Robert Murray and Cody Quattlebaum are scarcely less fine as the Evangelist and Jesus...This recording not only receives my highest possible recommendation; I confidently predict that it will be a landmark that finally places the Brockes Passion in the standard repertory, alongside Messiah and the two Bach Passions.

From the French-style opening tableau, the only extended chorus in the work, Egarr and his responsive forces hardly put a foot wrong. The superb playing and singing of the AAM go beyond mere notions of good Handelian style, while all the soloists ‘live’ their roles with operatic vividness. The words – overly sentimental or brutal for modern taste – always matter.

The recording uses a new performing edition of the score by oboist and musicologist Leo Duarte (who along with leader Bojan Čičić also contributes some ravishing obbligatos)...If Bach lays the narrative burden squarely on the shoulders of his Evangelists, Handel and Brockes present it from all angles...The young tenor Gwilym Bowen, as Peter, emerges as one of the most exciting voices on the set; the other stand-out new voice here is American bass-baritone Cody Quattlebaum as a very human Jesus.

Please welcome this exciting Brockes-Passion, in such a vibrant and luxurious recording...Egarr’s lively band, eloquent soloists and well-chiselled chorus are almost uniformly thrilling, as is the material…Nearly every personage is intensely human: an ideal match with Handel’s genius for presenting character conflicts in music...Peter’s agony is particularly well caught by the tenor Gwilym Bowen, while the humanity of Cody Quattlebaum’s Jesus is never in doubt.