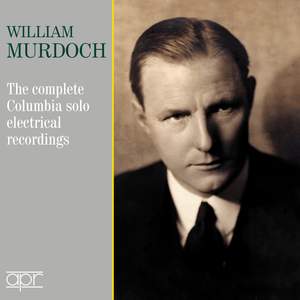 Murdoch’s exemplary pianism and intelligent musicianship consistently make themselves felt. The pianist himself singled out his 1927 Chopin Third Ballade as a favourite. One can hear why: his... — Gramophone Magazine, Awards Issue 2019 More…

Mendelssohn: Song without words in A ﬂat major Op. 38 No. 6 ‘Duetto’

Australian pianist William Murdoch (1888–1942) is almost forgotten today but was a major UK Columbia recording artist in the 1920s. A consummate musician, he was known as a chamber player as much as a soloist, as evidenced by many recordings, but was also the first pianist to record Beethoven’s 3rd piano concerto (acoustically in 1925). Amongst his solo recordings, pride of place must go to the two Beethoven sonatas which burst with energy and passion while never descending into superficiality. A little known and fascinating part of his legacy is his recording of the eight test pieces written for the National Piano Competition of 1928 organized by the Daily Express. This unique event was open to pianists of all abilities from beginner to advanced and the specially commissioned pieces, by contemporary British composers, reflected these different levels. Murdoch’s recordings originally came with spoken commentaries on interpretation.

Murdoch’s exemplary pianism and intelligent musicianship consistently make themselves felt. The pianist himself singled out his 1927 Chopin Third Ballade as a favourite. One can hear why: his fluently impassioned yet thoughtfully parsed interpretations ebbs and flows with naturalness and inevitability…Murdoch’s solo Beethoven, however, proves this collection’s prize.

His Mendelssohn is warmly nuanced and coloured, his Chopin not without a welcome touch of wildness in the coda of the Third Ballade or his virtuoso whirl through the F major Waltz Op 34/3. Similarly admirable is the contrast he draws between Grieg’s exuberance in his ‘Norwegian Bridal Procession’ and in the darker imaginings of the ‘Valse triste’.