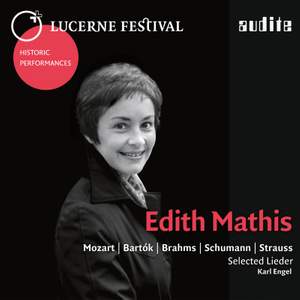 The grace and natural charm of her iridescent, silvery soprano voice was inescapable: Edith Mathis shaped the Mozart sound of her time. But her performances of the Bach passions, Haydn oratorios, as Ännchen in Weber’s Der Freischütz or as Sophie in Strauss’s Der Rosenkavalier were met with equal enthusiasm. She also set the benchmark as a song recitalist, including in the summer of 1975 in her home city of Lucerne.

Edith Mathis celebrated her 80th birthday in 2018. The 1960s saw her firmly establish herself on the international opera stage. One of Lucerne’s true “daughters”.

The live recording of this Lucerne song recital is now released for the first time. It includes a 28-page booklet in three languages containing a portrait of the singer by Jürgen Kesting. The Lucerne editions are painstakingly re-mastered and supplemented with photos and materials from the festival.