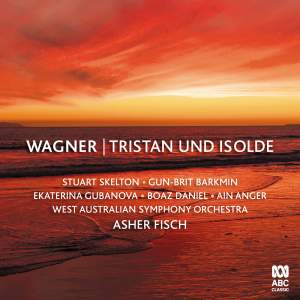 It feels like a first-time adventure to all in the best sense. That is undeniably due to the commitment and input of Asher Fisch on the podium, with a performance that keeps pace and heartbeat….[The... — Gramophone Magazine, December 2019 More…

This recording – captured live in concert in August 2018 – features a remarkable cast of singers including Stuart Skelton, one of the world’s greatest Wagner singers, who makes his long-awaited debut recording as Tristan. One of his signature roles, Skelton has performed Tristan to great acclaim all over the world, from The Metropolitan Opera in New York to the English National Opera and Germany’s Baden-Baden Festival, hailed as “a Tristan for the ages”, his performance “an unflagging, glorious lighthouse of Wagnerian singing, with inexhaustible power, vibrant resonance allied to warmth, subtlety and grace, and committed dramatic expression”.

Isolde is sung by German soprano Gun-Brit Barkmin, acclaimed over her glittering career for her interpretation of leading roles in works by Janáček, Britten, Berg, Wagner and Richard Strauss. Her Isolde was hailed as “thrilling”, “an extraordinarily complete portrayal” that was “a revelation”.

They are joined on this recording by an all-star cast including Ekaterina Gubanova, Boaz Daniel and Ain Anger, alongside the West Australian Symphony Orchestra conducted by their Principal Conductor Asher Fisch, one of today’s supreme Wagner interpreters.

Tristan und Isolde changed forever the rules about what music should and could be, and introduced concepts – including chromaticism, dissonance and even atonality – which would define the development of music throughout the 20th century.

But it is above all a work of staggering beauty, of love unfulfilled, where singers and orchestra come together in some of the most sublime music ever written. “Life and death, the whole import and existence of the outer world,” wrote Wagner himself, “here hang on nothing but the inner movements of the soul.”

It feels like a first-time adventure to all in the best sense. That is undeniably due to the commitment and input of Asher Fisch on the podium, with a performance that keeps pace and heartbeat….[The WASO] play like a pit orchestra rather than a symphony orchestra, always listening, always colouring, creating and then running with Wagner’s emotional temperature.

Under its principal conductor Asher Fisch [the WASO] is entirely on top of the score, every department contributing to the vividness and integrity of the overall picture… Skelton’s Tristan seizes hold of you from his first phrase and he is never fazed by the role’s demands… Barkmin’s Isolde possesses an equivalent variety of tone to Skelton’s.

Barkmin offers a formidable Isolde...Her firm lower register easily copes with those taxing low notes, a fine match for Stuart Skelton’s polished mahogany baritonal hue. His Tristan is most remarkable in its range of expression...Fisch shapes the whole with a firm grasp of the architecture; a lithe and supple reading...ABC Classic has captured the event with remarkably fine engineering.